Josh Gad is apparently on-board to play Roger Ebert in Russ & Roger Go Beyond, a fact-based comedy about the making of Beyond The Valley of the Dolls, for which the 27 year-old Ebert wrote the absurdist screenplay under the tutelage of softcore producer Russ Meyer (Will Ferrell). 20th Century Fox financed and distributed the mind-bending, mildly awful sex farce about an all-girl rock band, opening it on 6.17.70. 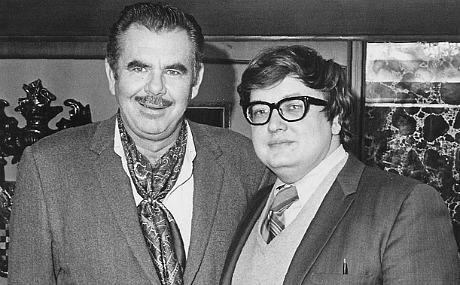 I was told about Gad’s casting by producer David Permut at today’s Variety brunch at the Parker Palm Springs. There was an earlier idea to cast Jonah Hill as Ebert, Permut told me a few months back, but that didn’t pan out. Hill has a thoughtful, whip-smart air about him — he would’ve been perfect. Ebert’s widow Chaz Ebert was at the same brunch, but had left by the time I heard about the Gad casting. I wonder what she thinks about her late film-critic husband being played by a guy who always seems to play hyper obsessives who can’t hold it in.

I was so taken aback by the notion of the geeky-mannered Gad playing the brilliant, urbane, smoothly-phrased Ebert that I forgot to ask Permut who will direct.

Russ & Roger Go Beyond has been described in Variety and Deadline stories as an upcoming indie since mid-2014. The screenplay has been written by Emmy winner Christopher Cluess.

I think Russ & Roger Go Beyond needs three or four more producers to round things out…no?

The weird part is that Ferrell is currently costarring in another film about behind-the-scenes Hollywood, James Franco‘s Zeroville, which takes place the same year that Beyond The Valley of the Dolls was made — i.e., 1969. The Zeroville logline: “A young actor arrives in Hollywood in 1969 during a transitional time in the industry.” It costars the director along with Ferrell, Seth Rogen, Megan Fox, Dave Franco, Joey King, Danny McBride, Craig Robinson and Jacki Weaver.