We all know about the black sheep syndrome — the brother or uncle or cousin who took a weird turn in life and wound up destitute or dead or in jail. (Like my younger brother Tony, who lived a marginal existence before suddenly dying last year.) And no one thinks this is a reflection upon anyone but the person who took those turns. And yet the sordid saga of Matthew Nolan, the older brother of Inception director Chris Nolan and screenwriter Jonathan Nolan, seems to contain echoes of the films that his siblings have made, or vice versa. 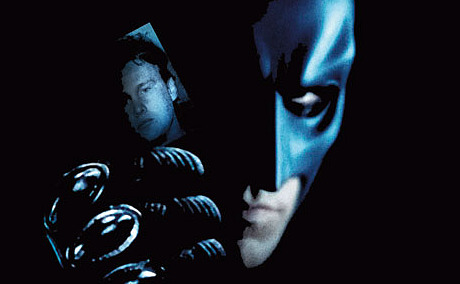 Matthew Nolan’s story — financial scams, check-kiting schemes, an attempted jailbreak, an accusation of murder — has been hashed over in a 6.27 London Sunday Times piece by Christopher Goodwin .

At the end of the article Goodwin writes about “how eerily the mystery about Matthew Nolan’s true identity, and his descent into a paranoid world of aliases, crime and murder, mirrors his brothers’ dark and bloody filmmaking obsessions.”

Goodwin also notes that the actions of Leonardo DiCaprio‘s character in Inception seem to contain reflections of Matthew Nolan’s misadventures.

DiCaprio “plays a conman who steals valuable secrets from people’s minds while they sleep,” he reports. “When he is embroiled in a deadly blackmailing scheme, he becomes an international fugitive whose dangerous secret life costs him everything he has ever loved. The film’s disturbing catch-line is: ‘Your mind is the scene of the crime.'”

On top of which is was pretty hard not to think of the jailed-Joker plotline when it was reported last November that Mathew Nolan had attempted to break out of Chicago’s Metropolitan Correctional Center using “31 feet of rope made from bed sheets, a body harness, a clip that would have been used to unlock handcuffs and a razor.”

Goodwin reports that “although the Nolan brothers’ late father, Brendan Nolan, who worked in advertising, was British, the Nolan brothers spent much of their childhood in Chicago because their mother, Christina, is from there.

“All three brothers — Matt, now 41, Chris, 39 and Jonathan, 34, known as Jonah — were privately educated and have dual British and American citizenship. [But] Matt, despite his English accent, is the only Nolan brother to have settled in Chicago . He has been living there with his American wife, Erika, and their two young boys in a $650,000, three-storey house in an upper-middle-class neighbourhood, not far from where the Obamas lived before moving to Washington. 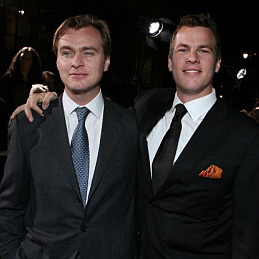 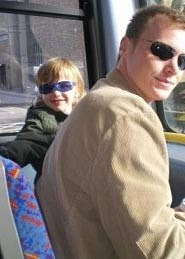 (l. ) Chris and Jonathan Nolan; (r.) an alleged photo of Matthew Nolan and (apparently) one of his children.

“Matt is the most charismatic, likeable and engaging of the three brothers, say people who know the family. Chris, the director and the most famous, comes across as very English — stiff, formal, private and weirdly obsessive: he keeps both his passports on him at all times in case of emergency. ‘He’s a cold guy who makes cold films,’ one producer recently said.

“Matt inherited his father’s gift as a storyteller. After their father died last year, Jonah Nolan recalled of him: ‘He would make up stories, most of the time on the spot. He had an amazing ability to spin a yarn, which he did right up to the end.’

“With those easy charms, Matt might have been expected to be the one to become the successful filmmaker. Brendan Nolan gave his children an 8mm camera when they were very young, and he and Chris and their friends made little films together. But Matt and Chris drifted apart over the years and now it’s Chris and Jonah who are friends and collaborators, despite their greater age difference.

“Chris and Jonah first worked together a decade ago on Memento, a paranoid psychological thriller, told in reverse, about a man with amnesia who desperately tries to find out who murdered his wife.

“The Nolan brothers’ nightmarish and bloody vision and their obsessive fascination with the criminal mind, the boundaries of psychological identity and social transgression, have since made them among the most successful filmmakers in the history of cinema.”

A friend of Matthew Nolan’s named Tom Sedlacek is said to have “often wondered whether sibling jealousy over Chris and Jonah Nolan’s extraordinary success in Hollywood may have pushed Matt, the oldest and most charismatic brother, to try to find his own fast-track to wealth.” 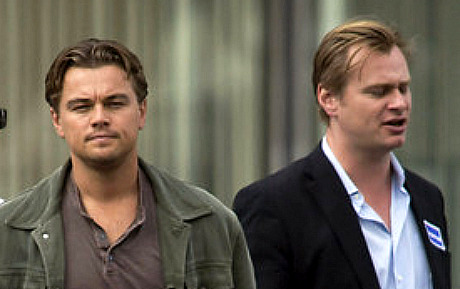 It was reported a year ago last March that Matthew Nolan had been arrested in Chicago on suspicion of murder, in connection with a 2005 killing in Costa Rica of Florida businessman Robert Cohen. “According to reports, Nolan and alleged accomplice Douglas Mejia went to Costa Rica to try to reclaim a 5 million pound debt that Cohen owed to another businessman,” one account said.

Nolan “had been under investigation by Chicago Police in a $700,000 bank-fraud (or check-kiting) scheme when FBI agents here nabbed him over the Cohen killing.

“Nolan pretended he was interested in doing business in Costa Rica when the two met in a hotel. But his real mission was to recover $7 million (U.S.) Cohen owed another Florida man, authorities said. An accomplice kidnapped Cohen and the men tried to extort the money from Cohen’s family; but when that failed, they killed Cohen, Costa Rican authorities said.”

“Matthew Nolan intended to do what no one has ever done — escape from the high-rise downtown Metropolitan Correctional Center,” a Chicago Tribune story reported. “The MCC is no Blackgate Penitentiary — one of the prisons in the Batman comics — but a Bureau of Prisons spokeswoman said its records show no one has ever escaped from the jail where gang leaders, mobsters and higher-lever drug dealers await trial. ”