Earlier today I enjoyed re-reading a December 2002 HE piece about Spike Jonze and Charlie Kaufman‘s Adaptation. No biggie and nothing related to today except it reminded me how smarty-pants types have this tendency to pick on highly original films, or to misunderstand them, and that it always seems to take them a while to get past their issues. I called it “The Truth About Charlie.” 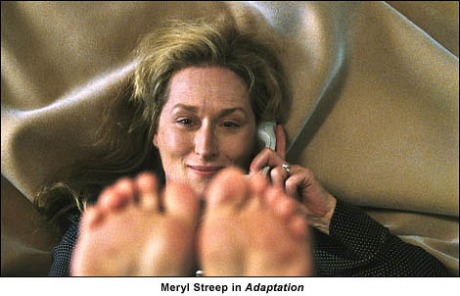 “Let’s cut to the chase about Adaptation (Columbia, opening Friday) and jump right into the Big Problem. The word over the last several weeks, partially fortified by my own opinion, has been about how wonderfully funny, trippy and original this Spike Jonze-Charlie Kaufman film is. Now, however, we’re hearing from a second wave of viewers talking about how nifty it all is until the third act, when Adaptation goes off the rails and falls apart.

“I don’t feel this way and didn’t even want to bring this up for fear of lending credibility, etc., but lately several people (including Time‘s Richard Corliss, The New Yorker‘s David Denby, my attorney friend Mark Kane and, according to credible sources, a good portion of the Motion Picture Academy, have been expressing these reservations, and the policy of ignoring them is now futile.

“And yet as recently as last weekend, I was still thinking about avoiding the issue out of respect for Kaufman, the Adaptation screenwriter who also wrote Being John Malkovich and Confessions Of A Dangerous Mind, and who is played in the film by Nicolas Cage. In interviews Kaufman has been doggedly avoiding talking about whether or not a certain character — his on-screen brother “Donald” Kaufman — actually exists, either within the film’s reality or, considering that Donald shares screenplay credit with Charlie in the Adaptation credit block, in real life.

“But the review in this week’s issue of Time declares flat-out that Donald ‘doesn’t exist,’ and the new issue of Newsweek adds ‘there is no Donald,’ so the milk is spilt and the gloves are off.

“About two years ago I reviewed Kaufman’s Adaptation script and called it ‘one of the most inventive and out-there scripts I’ve ever read.’ The main character, I explained, ‘is Kaufman himself, and that’s a big whoa right there. A screenplay about a screenwriter trying to write the screenplay? But it’s much more than that.

“The ‘subject’ of Adaptation is an actual, one-time orchid-worshipper named John LaRoche (Chris Cooper), whose attempted theft of rare flora from a Florida state preserve eight years ago resulted in his being prosecuted by the state and, from that, a New Yorker profile of LaRoche and then a book called ‘The Orchid Thief’ (Ballantine), by staff writer Susan Orlean (so named in the film and played by Meryl Streep). 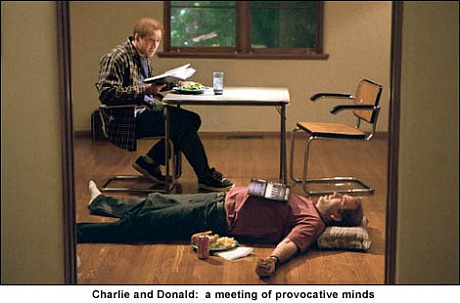 “Foremost among his issues is an earnest determination not to turn Orlean’s book into formulaic Hollywood pap — no guns or shootings or scenes with gratuituous sex, he proclaims. And no characters growing or learning life lessons, or coming to like or appreciate people they didn’t like at the beginning.

“Kaufman is also dealing with pressure to deliver from a producer and his agent (based to some extent on Kaufman’s United Talent Agency agent Marty Bowen), his loneliness and longings for various women (including Orlean), and his frustrating relationship with his no-account brother, Donald, a dim-witted devotee of the famous scriptwriting instructor Robert McKee (Brian Cox) who’s trying to write a screenplay of his own about a serial killer.

“The reality is that Donald Kaufman is a diversion — a phantom character along the lines of Andy Kaufman‘s alter-ego Tony Clifton. As Donald is also played by Cage, you can accept him as a feckless, oafish boob who is Charlie’s brother and is in fact writing a moronic serial-killer screenplay, or as a mirror reflection of some kind — a wish-fulfillment image or maybe a crassly opportunistic side of Charlie’s own nature.

“The nifty thing about Adaptation‘s third act — what I really love about it, and not what confuses me or hangs me up — is that Charlie’s difficulties in writing an ending for his bizarrely self-referential script are both cynically and sincerely ‘solved’ by Donald and McKee.

“It was clear from Kaufman’s script that he considers McKee to be nearly the villain of the piece. Kaufman obviously despises the screenwriting principles McKee espouses in his classes and in his book, ‘Story’, which many feel have resulted in thousands upon thousands of screenwriters churning out the same type of cookie-cutter plots with the same mechanisms and rhythms.

“The irony of Adaptation is that Charlie, desperate to pull his script together, goes to one of McKee’s classes and asks for his help. He also enlists the assistance of Donald, who flies to New York and gooses things along by interviewing Orlean at her office (‘She’s lying!,’ he announces triumphantly when he returns to Charlie’s hotel room) and then persuading Charlie to join him on a fast hop down to Florida.

“The goal of this excursion is to see what’s really going down between Orlean and LaRoche who, it turns out, are having a passionate affair and involved in the selling of hallucinogens. They’re also more than willing to kill the brothers after their secret is discovered. But there’s an upside to these Michael Bay shenanigans: the brothers wind up sharing a tender moment together, and Charlie comes to realize how much he loves his dopier, less-hung-up half.

“Believe it or not, there are people who’ve seen Adaptation who are taking these pumped-up events half-literally, and not as a metaphor for Charlie-the-screenwriter’s ultimate act of adaptation — i.e., devising an ending that most Hollywood producers would probably be satisfied with, or that Donald might have written, or McKee might have sanctioned. 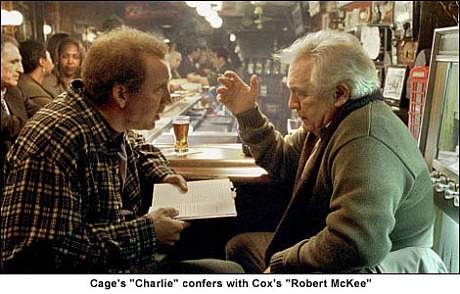 “Time‘s Schickel says the ending is ‘a desperation move’…[one] ‘we are unprepared for and don’t believe.’ In fact the movie has spent its entire length setting it up, quite methodically.

“Other naysayers are interpreting the ending as a cynical lampoon of third-act solutions of this type. What they’re saying is that while most of the movie is very un-cynical — cleverly comical, earnest, touched by sadness, exploratory — the Michael Bay-ish third act is an abrupt shift of strategy and tone, and that whatever the reason for it the lack of harmony with what has gone before is unsettling.

“They’re not wrong. Kaufman’s ending comes from his bitter feelings about Hollywood. My pet theory is that he really couldn’t figure out how to lick Adaptation, and therefore concluded that ‘Charlie’ wouldn’t or couldn’t figure out how to adapt ‘The Orchid Thief’ to his complete artistic satisfaction. So he turned Orlean into a drug-snorting, gun-toting infidel and gave LaRoche a gruesome send-off in a Florida swamp.

“In short, Kaufman abandons who they are as New Yorker-born, flesh-and-blood characters and throws them to the lions (or alligators, as it were). I think this strategy is terrific nonetheless because it totally tabulates for a movie that, in its Hollywood depictions, has been almost entirely about the Charlie way vs. the Donald way of making movies. And because, the cynicism aside, I completely believed in the Charlie-Donald cuddle-up scenes toward the end.

“A word of praise for Cage, who does a beautiful job of bringing these scenes to life and making us completely forget we’re looking at an actor playing to himself. Charlie-Donald is his best role in years, and easily the most emotionally affecting performance of this type in film history. The guy from Vampire’s Kiss has returned after having nearly Jerry Bruckheimer‘ed and Joel Schumacher‘ed his career to death. For this alone he deserves an Oscar nomination and a hearty pat on the back.

“Streep’s Susan Orlean amounts to the warmest and most spontaneous performance of her life, I feel. And I totally agree with predictions that Cooper will end up a Best Supporting Actor nominee, mainly because he deserves to be. And each and every secondary female in this film is note-perfect — Cara Seymour, Judy Greer, Tilda Swinton, Maggie Gyllenhaal, Catherine Keener, etc.

“And a special round of applause for Ron Livingston‘s performance as Marty-the-agent. His anal-sex remark got the biggest laugh by far at a recent packed showing of Adaptation at the American Cinematheque. And I don’t mean just the loudest but the longest. You know a joke has really connected when you can hear people still laughing ten or twenty seconds later.”