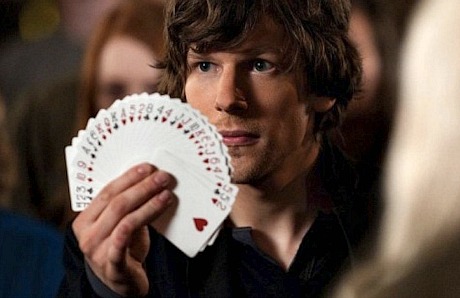 Interviewers like Puga represent a kind of spiritual flu virus in the eyes of many if not most celebrities, but the celebs hold it in and play the game because they’re trying to sell a film as best they can. Eisenberg, a Woody Allen-styled neurotic but also a thoughtful Rennaissance man whom I’ve been running into at junkets and press events since 2002’s Roger Dodger, had gone through the paces for hours or days on end…yaddah-yaddah-yaddah-yaddah-yaddah-yaddah-yaddah-yaddah-yaddah-yaddah….and then succumbed to an involuntary truth spasm and just (oh my God! are you sitting down?) blurted out what he really thinks.

Breaking HE news bulletin: Pretty much every actor and/or filmmaker who has ever participated in a movie junket has had the same feelings and thoughts that Eisenberg expressed. I’m 100% sincere when I say that more of them need to follow Eisenberg’s lead…please! People like me hate the Pugas of this world. She and her friends probably break out in giggling fits while drinking wine in saloons.

And let’s not overdo the sympathy hugs for poor little Puga. Before this happened she was just another Charlie Nobody TV interviewer whose last name ended in a vowel. Now she’s famous, or at least is savoring a nice juicy 15-minute cycle. I’m not saying that the Today show will make her an offer, but big-time TV producers definitely have her on their radar now. She may have been Carrot Top while speaking to Eisenberg, but now she’s the Jennifer Aniston of TV interviewers — the smiling, unpretentious girl-next-door who was cruelly humiliated by the big-name actor and went through emotional torment as a result. Every none-too-worldly girl in the world has had at least one encounter like this with some stuck-up, know-it-all jerk, and now these girls will all rally ’round her. We love you, Rubina!

Carrot Top himself will draw bigger crowds in Las Vegas because of this…c’mon, everybody’s a winner here!

Just as my wifi tantrum was the best thing that ever happened to the Oxford Film Festival because this episode put that agreeable but basically minor film festival on the map, Eisenberg was the best thing that ever happened to Puga. She can write her own ticket now. She’ll soon be able to buy a house or at least a condo. Good-looking guys will now be coming over to talk to her at parties. Okay, she’ll still have to work hard and pay her bills and maybe suffer the occasional setback like the rest of us, but her life has certaily been changed for the better.

Oh, and I was going to run with this yesterday but I couldn’t watch the Eisenberg video for the longest time because of some idiotic YouTube policy about letting videos of a certain type be seen in Europe.