The big question with the 1.29 release of a digitally remastered El Cid — a two-disc box set with all kinds of extras from Bob and Harvey Weinstein‘s Miriam Collection — is “what elements did they work from?” Did the guys who did the digital remastering scan the original negative (which should be in excellent shape, a restoration authority believes) or did they work from the same separation masters with registration problems that resulted in that slightly cruddy-looking, bordering-on-despised Criterion laserdisc from the ’90s? 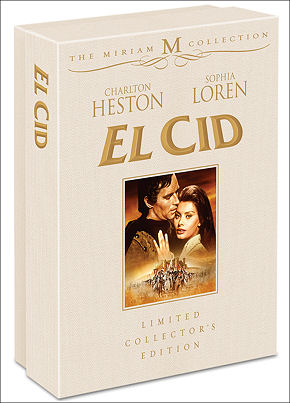 Let’s be optimistic and hope/presume that this new El Cid will be a lot better looking. I’ve called around and no one seems to know who oversaw the digital remastering, much less which elements it was taken from. A guy named Gerry Byrne appears on the DVD in a short video piece in which he discusses “the importance of film preservation and restoration.” My restoration source didn’t know Byrne from Adam.
The film was originally shot in 35m 8-perf — the same sideways-through-the-gate format that Spartacus was shot on. It was then blown up to 70mm and called Super Technirama 70.
Directed by Anthony Mann and starring Charlton Heston, Sophia Loren, Raf Vallone and Herbert Lom, El Cid is a dramatically respectable film with a still-interesting subtext — a battle between valiant Christians and marauding, wild-eyed Moors. A little stiff, a little too stately for its own good…but that was the style of the day. 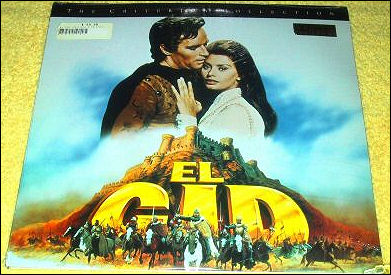 I remember liking the first half (i.e., the part mainly concerned with love and honor — Heston’s personal issues and his hunger for Loren’s Jimena) better than the second half in which Heston wears a beard and struts around like a great God-like figure. I remember a pretty good jousting-and-sword fight sequence in an arena.
The single best element in the whole film, if you ask me, is Miklos Rosza‘s score.
Martin Scorsese, naturally, offers an introduction on the DVD. If you buy the big box you can own the original El Cid comic book. The box will cost $39.92; the deluxe two-disc package without the extras will sell for $24.95.
The film itself will be projected at an Arclight screening on 1.28.08. I’m definitely attending. 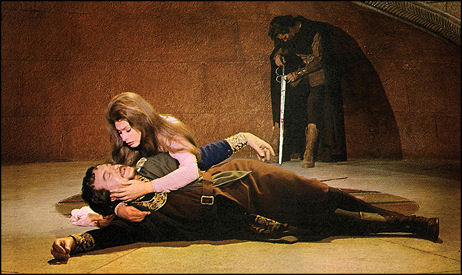