Isabel Coixet‘s Elegy, the Penelope Cruz-Ben Kingsley drama that debuted at the Berlin Film Festival, is going to be domestically distributed by Samuel Goldwyn Films and Sony Pictures Worldwide Acquisitions Group…whatever that means. Indiewire is reporting that Netflix’s Red Envelope Entertainment “is also on board for the release and will work to promote the film to their 7 million subscribers,” blah blah. Pic is based on Philip Roth‘s short novel The Dying Animal. 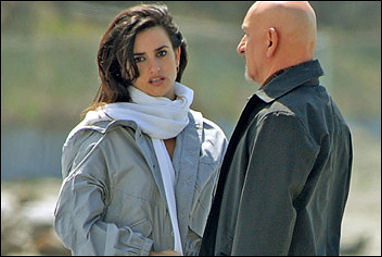 Presumably Elegy will be released domestically sometime this year.
Variety‘s Leslie Felperin gave Elegy a thumbs-up response. Key passage: “Scenes unfold in a series of near-musical dialogue duets, with Ben Kingsley offering finely-phrased arias of self-deprecation and despair. Despite the age difference, he and Penelope Cruz (who’s never been better in English) look somehow chemically balanced and credible as a couple in a way Nicole Kidman and Anthony Hopkins never did in The Human Stain.”