In a 1.26.22 Hollywood Reporter interview with West Side Story costars Rachel Zegler, Ariana DeBose and Rita Moreno, Rebecca Sun, who has skin in the game of “sharing the perspectives and stories of the underserved,” offers the actresses a chance to firmly and unambiguously throw costar Ansel Elgort under the bus, once and for all.

The issue is that completely debunked bullshit charge about Elgort having sexually assaulted a 17 year-old named “Gabby” when he was 20, despite every piece of testimony (Twitter and otherwise) indicating that nothing resembling an assault ever happened and that the worst Elgort could be accused of was ghosting Gabby after being intimate with her.

That’s all it was — seven years ago he acted insensitively or callously and thereby hurt her feelings. Which he’s said he’s sorry for and ashamed of. 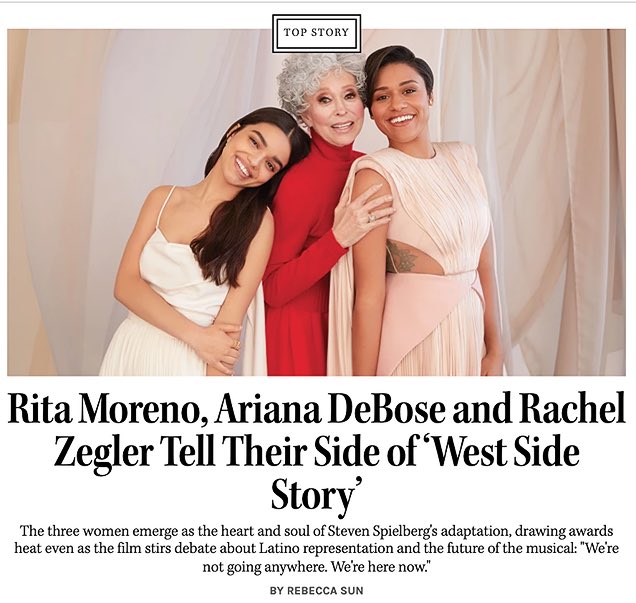 So do Zegler, DeBose and Moreno throw him to the wolves? In a manner of speaking, kind of.

The talented, good-looking Elgort (great singing voice) appears to be a pleasant guy, and he presumably behaved in an agreeable and considerate way during filming. The normal inclination among friendly costars would be to say “this isn’t my affair but to me, Ansel is cool…I like him a lot…he’s a true professional and an elegant man…he gets my up-vote.” But Zegler, DeBose and Moreno have all spoken dispassionately and absent any affection or consideration for the guy.

Zegler: “We made a movie two and a half years ago, and a lot has gone on in the world since then. A lot has changed very publicly, and privately as well. There’s been a lot of awakening.”

HE-Zegler translation: “Twitter has wanted Ansel dead and dismembered for 18 months now, and I’m not stepping into this. If his career is over, it’s over, but don’t make me an accessory after the fact. I’m not in this. Plus Twitter has decided that any relationship defined by a ‘power imbalance’ — Ansel was famous, Gabby was nobody — is an indictment in itself, and Ansel, who may or may not be an evil predator, will have to weather this storm on his own. I don’t know from the details, and I’m certainly not going to get detoured into a big Ansel discussion in this interview, which is about glorifying me, Rita and Ariana.”

DeBose: “Nobody really knows what’s going on in anyone’s head. Only the people who were involved in that situation know what actually went down.”

HE response to DeBose: “True, but if you’d read anything about this you’d at least understand that the intimate relations between Ansel and Gabby were consensual and legal by the laws of New York State, and that Gabby’s complaint basically boiled down to having her feelings hurt.”

Moreno: “I think it would have been absolutely horrendous and wrong for anyone to take sides in that matter. It’s not for me to make those judgments.”

HE-Moreno translation: “Leave me out of this, I’m looking for my second Best Supporting Actress Oscar. Ansel’s issues, whatever they may be, are not my affair.”

I’ve been writing about the Ansel-Gabby thing for a year and a half now. It’s been mined to death and there’s no criminality, no smoking gun…nothing.

Friendo: “It doesn’t even matter if he did anything or not. There is no due process.”

HE: “He was intimate with Gabby once or twice, and then he ghosted her. He hurt her feelings. In my youth I was ghosted once or twice by women — it felt awful. And I ghosted women once or twice — I’m sure they felt terrible in the aftermath. But that’s where it stayed.”

Friendo: “It’s just so gross how everyone has to be asked to comment on it.”

HE: “JustJared repeats the ‘sexual assault’ allegation without stating that there’s no basis for anyone using that term, and that Gabby was a totally legal 17. It was legal for them to fuck. He didn’t ‘assault’ her — he hurt her feelings.”

Friendo: “He’s expendable. The collective outrage takes priority and the mob must be served.”

HE: “DeBose says nobody knows what happened. Well, we know there was NO SEXUAL ASSAULT! This is another crime of ‘power imbalance.’ He was famous and she was nobody, and so he selfishly used her and then walked away. Rachel implies that Ansel may be dirty on some level, and that he may have crossed an ethical line on some level. But you know what? Love hurts, lovers get jilted, feelings are strong, rejection is a knife, it’s unpleasant and painful. But you heal and move on.”

Friendo: “They have to play the game to satisfy the beast. It makes me so sad. No one can actually speak the truth right now about anything. The left has basically become everything it used to hate.”

Friendo: “Yes, you but no one in the mainstream media or celebrities. There are subversive voices, of course, but on the top layer there is a climate of fear and a culture of silence.” 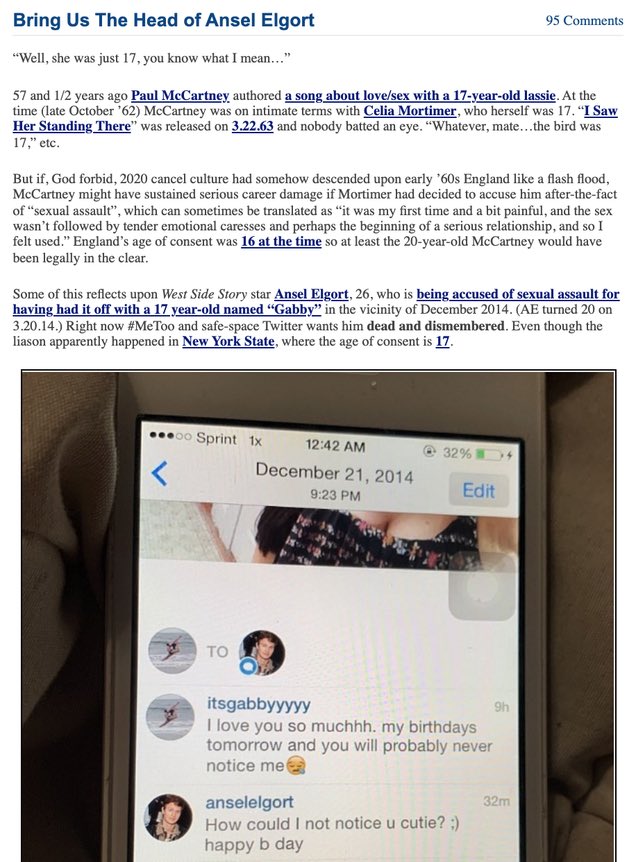