Enough With The Kids

Reading Suzie Woz‘s USA Today article about Max Records, the 11 year-old star of Spike Jonze‘s Where The Wild Things Are (Warner Bros., 10.16) brought a wonderfully cleansing thought into my head. 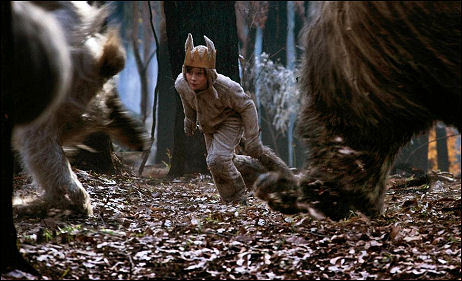 I don’t want to see Where The Wild Things Are because I don’t like movies about kids. Not any more. Exceptions will always occur (and thank god for that), but I pretty much don’t give a damn about coming-of-age movies or learning-a-tough-lesson movies or movies about young kids going through an adventure that changes their life and/or has a profound impact. Really, throw all that shit out the window.

I’ll tell you one reason why I’m not the only one thinking this. The Great Recession has been scaring the hell out of people, and with everyone getting down to brass tacks and doing what they can to survive parents are realizing that they haven’t done their kids any favors by funding a cut-off, over-indulged fantasy realm for them to live in. That’s what the Wall Street pirates have been doing in a sense since Bush came in and look what happened.

Kids need to grow up and grim up and learn the skills and disciplines that will allow them to survive. So enough with the Spielberg-aping films that portray a child’s world as a magical-fantastical kingdom in and of itself that adults might be able to learn something from.

I loved E.T. when I first saw it 27 years ago, but the last time I watched (i.e., when the last loaded-with-extras bullshit DVD came out) I had a moderately hard time. There’s no filmmaker who’s more sentimental, manipulative and emotionally cloying than Steven Spielberg when it comes to under-age characters. His films are like McDonald’s french fries; they tend to age very badly.

It’s taken years to realize this, but I think my profound dislike of kid films initially came from the one-two punch of Spielberg’s Hook (’91) and George Lucas‘s The Phantom Menace (’99). (Jake Lloyd‘s performance as Anakin Skywalker was surely one of the most agonizing ever delivered in motion picture history.) Those two left me doubled-over, and then along came Spielberg’s A.I. and I was really done with kids playing lead roles. A ten-year process, that.

I don’t think I’ve been able to really go with a film about a kid (or kids) since. I’m sure I’m forgetting a good kid-in-the-lead film that’s been out over the last seven or eight years.

The Hook-Phantom Menace-A.I. whammy was a bit like my getting sick from eating too much corn bread at my grandmother’s home when I was ten. I wasn’t able to even smell corn bread for two or three decades after that.

This prejudice is partly about my pretty much having had it with kids in real life. Unless they’re your own children or your girlfriend’s or they’re natural-born geniuses (I would have loved to have known Pablo Picasso when he was 6 or 7), kids are not people you want to hang with for the most part. Ideally, I mean. They tend to be dull (i.e., obsessive), anarchic, shallow, uninteresting, overly self-regarding and for the most part unengaged in anything other than their own insipid, corporate-created distractions.

This sounds like a joke but we need to go back to the Victorian tradition of kids being seen but not heard and sometimes being taken out to the woodshed when they act up. They need to talk and share about their own lives, of course, but they really do need to ask more questions about the experiences of adults in the real world. They also need to be made to eat on their own on a card table in the den on Thanksgiving and Christmas Day and Easter.

We also need to return to the standards of most early to mid 20th Century movies in which kids were not the primary focus. There were some excellent studio-era films made with kids in the lead, of course. Standouts off the top of my head are The Boy With the Green Hair, The Red Pony, Old Yeller, Night of the Hunter, My Life as a Dog, The Silence, The Sixth Sense , etc. But by and large pre-1980s films stayed away from films in which kids played the lead(s), and we need to get back to that. 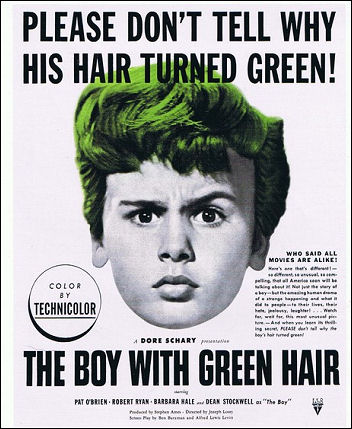 And that includes teenagers. I hate teenager movies unless they have characters who remind me of myself when I was 16 or 17, which is to say a kid with at least a semblance of a brain and a semi-developed vocabulary and actual curiosity about the world outside his/her immediate realm. Twilight met that test for me — I believed in that film almost all the way through. Another exception is Risky Business, which I’ll be able to enjoy when I’m 95. Heathers is another. But serious quality-level teenage films are very few and far between.

And I don’t want to hear any crap about how I’m getting colorfully cantankerous and channeling Andy Rooney. The ones out there who believe that American culture should celebrate and nurture adolescence as an end in itself are the loonies, not me. The wake-up call of the Great Recession means — or certainly should mean — that the age of the “infantilization of movies” (a term coined by Pauline Kael, as I recall, in an attempt to describe the influence that Spielberg and Lucas began to exert in the mid ’70s) is coming to an end.

Woz reports that audiences will get a chance to check out a trailer for Where The Wild Things Are on Friday if they happen to see Monsters vs. Aliens. Otherwise, I’m sure it’ll turn up online a few days after that.