Why is this “shock the rubes” gay makeout stunt, staged for a sequence in Sacha Baron Cohen‘s Bruno movie, only being reported now (7.8) by The Smoking Gun when it happened a full month ago? No reporters in Arkansas picked up on this? Asleep at the wheel. 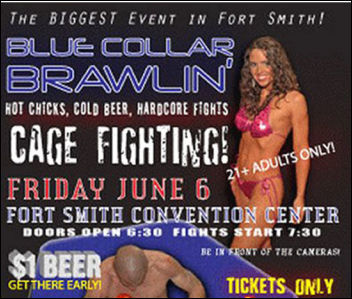 “Lured by $1 beer and the prospect of ‘hot chicks’ and ‘hardcore fights,’ thousands of Arkansans were duped last month into appearing as extras in comedian Sacha Baron Cohen’s latest staged mayhem,” the story says. “Cohen and his confederates organized cage fighting programs on consecutive days in Texarkana and Fort Smith.
“Both cards ended with two male grapplers (one was identified as ‘Straight Dave‘ and wore camouflage) tearing each other’s clothes off and, while in underwear, kissing down their opponent’s chest. This man-on-man action triggered Fort Smith fans to throw chairs and beer at the ring, according to one cop present at the city’s convention center.”