EPIX Color Airing of Nebraska Should Be Damned Interesting

A color version of Nebraska is showing this Sunday night (8.10) on EPIX, and I for one wouldn’t miss it for the world. Online voices are claiming that the EPIX showing will be some kind of travesty, but don’t you believe it. In an interview last year with Fade In‘s F.X. Feeney, director Alexander Payne said that while a color palette is “not right for the film,” he “saw the color version once” and “liked it. It was really pretty. Some shots look even prettier in color. We made it look like a color from about 1970 or ’71, like the colors in Five Easy Pieces, for example.” 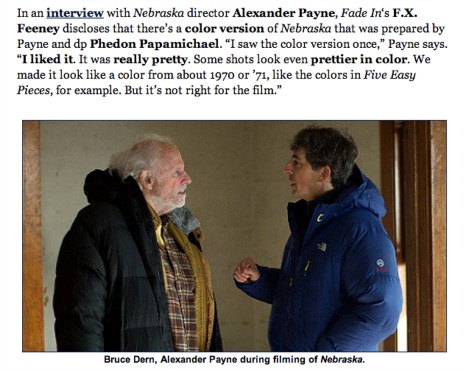 In an 11.20.13 Variety piece, the Nebraska director was quoted saying he hopes “no one ever sees” the color version of Nebraska, which he was contractually obliged to deliver so Paramount wouldn’t lose money on certain markets –“several,” Payne apparently said — that have color-only stipulations.

“’I’ll…give you a colored version for those specific TV outlets in Moldova and Sierra Leone and Laos or wherever,’” Payne told Paramount execs. “So I made a color version. I hope no one ever sees it.”

But why not? Where’s the harm at this stage? Payne calls the color version “really pretty” and he doesn’t want me or anyone else to see it? Fuck that. We’ve all seen Phedon Papamichael‘s Oscar-nominated black-and-white version over and over and over again. I’ve seen that film six times — three theatrical screenings (once in Cannes, twice on the Paramount lot), once on an Academy DVD screener, and twice on Bluray. I want my color version and if Payne doesn’t like it, tough.

The only problem is that I don’t have EPIX on my Time Warner feed, and now I’m going to have to shell out God-knows-how-much to see it.

For what it’s worth, the Nebraska-in-color story was broken yesterday afternoon by Indiewire‘s Tom Brueggemann.