Evans Is The Guy

Keanu Reeves‘ portrayal of his ragged-edge L.A. detective in David Ayer‘s Street Kings is one reason I wasn’t very comfortable watching it. Forrest Whitaker‘s performance, as I explained on 4.5, is another. There’s a costar I did like, however — took to him immediately, decided he was cool. I’m speaking of 26 year-old Chris Evans, who plays a younger cop who pools forces with Reeves around the beginning of the third act. 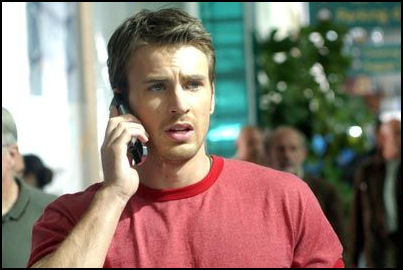 I was therefore doubly irate at this film when…how can I put this? If you have a strong character with natural charisma, a director should introduce him early and keep him around until the end.
Evans has had decent roles in ’05’s Cellular and Fantastic Four and ’07’s Sunshine, Rise of the Silver Surfer and The Nanny Diaries. But these and Street Kings are second-tier audience movies directed by B-level directors (or, in the case of Sunshine, an A-level director off his game.) Evans has the stuff, I believe, that can move him up the ladder. But it won’t happen if he doesn’t hook himself up with A-level guys — Paul Thomas Anderson, Michael Mann, Wes Anderson, Alejandro Gonzalez Innaritu, Alfonso Cuaron, Steven Soderbergh, the Coen brothers, etc.
It seems odd, also, that in her half-joshing review of Street Kings, Manohla Dargis doesn’t even mention Evans. She’s one of the sharpest critics around and I’m not wrong about Evans, so what’s the explanation? I know what I know and I’m right. Evans is the guy you like in this film.
The only problem is that he needs to lose the U.S. Marines haircut, which he had during the Street Kings junket.