An 11 am screening of Sarah’s Key prevents me from getting into Captain America until sometime this afternoon, but Drew McWeeny‘s HitFix review says most of what I would have said and some other stuff I wouldn’t have written because I’m not enough of a geek. 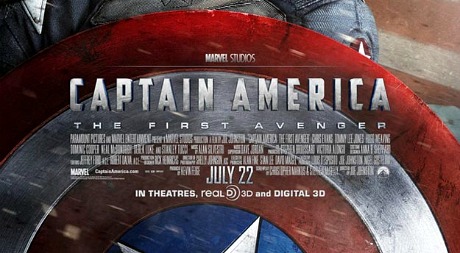 “Captain America: The First Avenger is one of the finest movies yet from Marvel Studios, and a big departure in tone and storytelling from most of the films they’ve made so far. It is a strong indicator that the more willing the studio is to experiment, the more exciting the payoffs can be. In this case, there’s no clear precursor to this one in anything else Marvel’s done, and it feels like branching out and trying something this different freed them up.

“It helps that director Joe Johnston shot the film like he had something to prove and Chris Evans appears to have been born for this role. Everything came together here in a way that I’m not sure anyone could have predicted, and that indefinable chemistry is one of the things that makes this feel so special.

“The first and most immediate difference between this and the other movies Marvel has made so far is the time frame over which the story plays out. The film starts in the present day, then flashes back to the early days of WWII. The main story plays out not over days or even weeks, but over years. It is, in essence, a look at the entire WWII career of Captain America, and his origins as Steve Rogers.

“It isn’t structured like a typical superhero film, either. It focuses on two main arcs over the course of its running time. First, there’s the story of Rogers, a skinny weakling with a lion’s heart who is chosen to be the test subject in the Super Soldier program headed by Dr. Abraham Erskine (Stanley Tucci) and how he learns to handle the power he’s been granted. At the same time, we follow the efforts of Johann Schmidt (Hugo Weaving), aka The Red Skull, whose HYDRA is starting to outgrow its origins as the dark science division of the Nazis thanks to his discovery of a strange glowing cube that once resided in the vault of weapons kept by Odin in Asgard.

“The collision between these two story arcs is what keeps driving the movie forward, but there is plenty of room built in for digressions, and the end result feels like reading an entire collection of issues of the same book.

“Marvel has been working towards this moment for a while, and there have been a few moments where it felt like they were making missteps with the individual movies in their rush to reach The Avengers, but they’ve saved one of their very best movies for last, and I suspect Captain America: The First Avenger will send audiences out of the theater rabid to see what’s next.”

I’m predicting here and now that Captain America will be better than The Avengers. Another ensemble superhero piece? Blah. Give me the purity and cleanliness of what I saw last night any day.

And I need to say without malice (and in fact with a certain arm-over-the-shoulder compassion) that the five big critics who’ve panned it so far —Kirk Honeycutt, Karina Longworth, Emmanuel Levy, Marshall Fine and Tim Grierson — need to unblock themselves somehow. I don’t know what’s wrong with them or what they’ve been eating or not doing enough of, but they’re wrong, wrong….no, that’s rash. There is no “wrong” or “right” in responding to a film. But they clearly are not seeing. They won’t or can’t let this movie in.

The reception to Captain America may be one of those watershed moments in the 21st Century that defines who and what we are as people, as critics or columnists, as film disciples. I don’t want to go nuts here, but I think it’s safe to say that people will be trashing this amazingly concise, uplifting, fliuid, dazzling, emotionally earnest yesteryear art spectacle at their own longterm peril. They’re going to have to live with what they’ve written for years, and it will stay with them like a snapping turtle biting into their foot.