From a 9.29 Sasha Stone piece that is subheaded with “Daniel Craig Says Goodbye in Style“…

Sasha #1: “James Bond is most definitely for the masses. And it’s coming at exactly the right time. The American public has never needed movies more than it does right now.”

HE exception #1: I’m sorry that sounds too much like that infamous poster slogan for 1974’s That’s Entertainment! — “Boy, do we need it now!”

Sasha #2: “We need [movies] in order to remember what it’s like to sit alongside our fellow Americans, regardless of political party, skin color or religion. They give us that rare chance, outside of going to church or sporting events, where we can share an experience in the dark with the smell of popcorn wafting through. At the cineplex you are among people you don’t know and [absorbing] a message you all will share. Sometimes that can be a transformative experience, if the movie is good enough.” 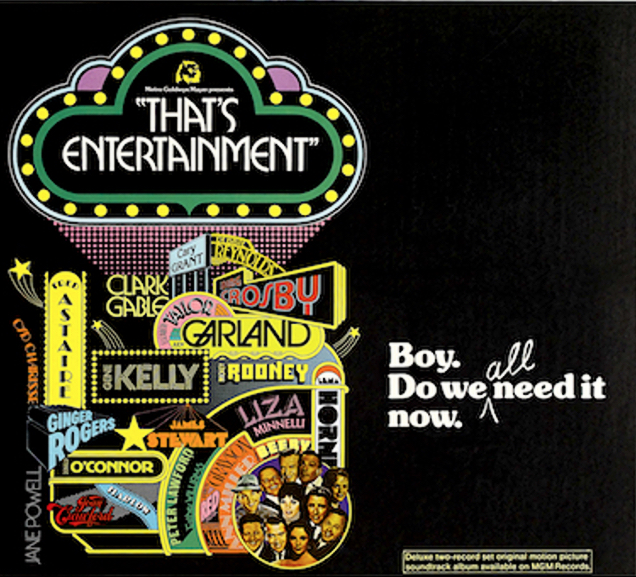 HE exception #2: Due respect to other moviegoers, but I don’t want to sit next to most of you. You’re loud and coarse and checking your phones all the time, and you suffer from ADD and you sometimes laugh at the wrong things or fail to laugh at the right things. I’m totally cool with Telluride Film Festival patrons, but…well, I’ve said it.

Sasha #3: “There isn’t a whiff of politics in No Time To Die — it is mostly pure fun, with a little bit of seriousness.”

HE exception #3: Sorry, but there is a whiff of politics in this film, but…aahh, forget it.

HE exception #4: I don’t know what Sasha could be alluding to, but I kind of resent it. Actually, I’m seething. I’ve half a mind to contact a few of HE’s comment threaders and maybe buy some torches and go over to Sasha’s place and make trouble.”