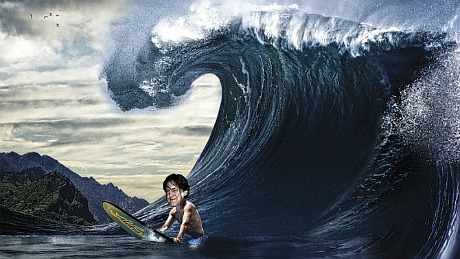 In a recap of Crowe’s career Rainey never mentions the stinkbomb that was Elizabethtown (’05), and he also declines to mention the original Son of Deep Tiki — Crowe’s earlier (2008) incarnation of Aloha which would have costarred Ben Stiller and Reese Witherspoon. In other words Rainey can read the writing on the wall and is seemingly trying to be a nice guy. But the Variety illustration that accompanies the piece isn’t trying to be that nice. It’s an image of a surfboard-paddling Crowe about to get creamed by a huge wave.

With this kind of buildup all Aloha has to do is be half-decent and critics will do cartwheels in the lobby.

May 19, 2015by Jeffrey Wells32 Comments
« Previous post
Youth: A Matter Of Ego, Mood, Design, Spirit
Next post »
The Real Thing