The five kids from Davis Guggenheim‘s Waiting for Superman — Francisco, Bianca, Daisy, Emily and Anthony — with President Obama yesterday in the Oval Office. 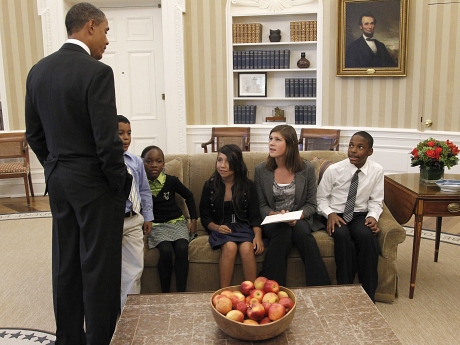 The widely-admired Superman, which has a 93% Rotten Tomatoes rating, opened last Friday.

It wasn’t easy, but I’ve managed to not see Waiting for Superman for several months running. I missed it at Sundance, Toronto, and at last weekend’s Hamptons Film Festival. All of these misses were obviously my fault. And yet I was never invited to a single Manhattan screening by Paramount or agency reps. Not once.

I’ll correct this situation sometime this week. I’l catch it at a commercial venue or get a screener for Paramount reps.

October 12, 2010by Jeffrey Wells16 Comments
« Previous post
Everything Is Fine
Next post »
"No Life Of His Own"