Los Angelenos interested in catching Lars von Trier‘s Melancholia before its 11.11.11 domestic release date should scoot out to Laemmle’s Fallbrook 7 between today and next Thursday, 7.28. The gloomy apocalyptic drama began quietly playing yesterday on a one-afternoon-screening-per-day basis, and will remain there for six more days. 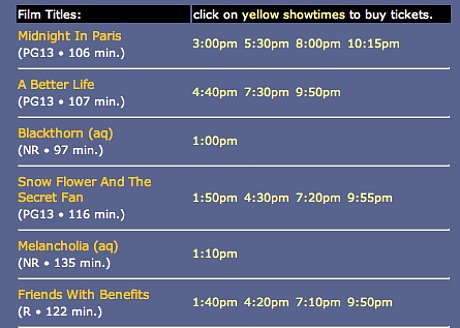 opened in various Nordic countries last May, and Oscar’s Foreign-Language Wiki page says that “unlike other Academy Awards, the Foreign Language Film Award does not require films to be released in the United States in order to be eligible for competition.”

In short, the reason that Magnolia has booked Melancholia at the Fallbrook is beyond my limited pea-brain capabilities,.

Here’s a portion of my Cannes Film Festival Melancholia review:

“Melancholia is a much more striking thing for where it starts and what it attempts than how it plays.

“I can understand Cannes critics going ‘wow!’ over the film’s audacity or whatever (the moody-gloomy beauty, the melancholy current), but I can’t honestly see how they could call it a top contender for the Palme d’Or. It’s basically just a stylishly nutso, intriguing, semi-bombastic ensemble piece about despair in the face of eventual ruination . You know…the kind of thing that most HE readers have in their heads each and every day.

“I felt elation only in the very beginning, and somewhat at the very end. But otherwise it mostly felt like a meditative slog. It’s not without its intrigues but lacking tension and a through-line and a story, really, of any kind. I don’t imagine this film will be embraced by pro-family Christian groups, or even the rightwing end-of-days crowd (although…naah, forget it).

“Melancholia is definitely better than Von Trier’s Antichrist — I’ll give it that. Death dance, death art…when worlds collide. Von Trier had a mildly intriguing idea here but didn’t know what to do with it, or he perhaps didn’t care to try. All he does is riff about how tradition and togetherness are over and very few of us care. My sense is that Von Trier experimented and jazz-riffed his way through most of the filming.