One thing that the Academy of Motion Pictures Arts & Sciences has been really, really good at this year is disqualifying or dismissing Oscar-worthy contenders. They disqualified Jonny Greenwood‘s There Will be Blood score. The foreign committee scrubbed The Band’s Visit and 4 Months, 3 Weeks & 2 Days. And now, according to N.Y. Times Oscar blogger David Carr (a.k.a. “the Bagger”), there is talk that “Falling Slowly,” the beautiful love ballad from Once, may be ruled ineligible for a Best Song Oscar. 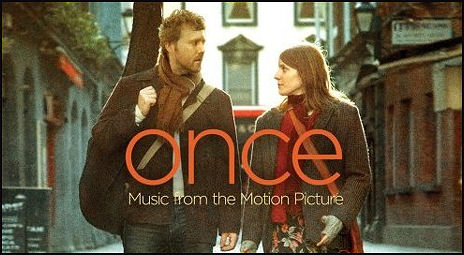 “An original song consists of words and music, both of which are original and written specifically for the film,” the Academy rules state. Carr says it is unclear how “Falling Slowly” may have run afoul of said rules, but the music branch of the Academy branch will be looking into the matter on Monday with a decision to follow soon after.
Carr advises readers to “wait until all the facts are in before commencing to freak out.” Okay, I’ll bide my tim. Bnd if the Academy rules against the eligibility of Glenn Hansard and Marketa Irglova‘s delicate, heart-lifting tune, it will really and truly be time to get out the torches and the pitchforks. I’ve used that metaphor before, but this is serious. These people seem to do nothing but say “no,” “no” and “not you either.”
A poster named “M” has written the following about this situation: “I believe, and correct me if I’m wrong, that Hansgard was so enamored with the song during the filming of the movie that he recorded it with his band for release, anticipating that Once would not get wide release and wanting to give the song as much exposure as possible. The song itself was specifically written for the film, but recorded a couple of times before the film released in the U.S.
“That said, if ‘Falling Slowly’ loses to some sugar candy crap from Enchanted, I’m giving up on the Oscars entirely.”
Followup: a story posted today by the Dublin-based RTE Entertainment states that “Falling Slowly” was written for the film and captured on tape in January 2006. It later appeared on ‘The Swell Season’, a 2006 album recorded by Hansard and Irglova that came out in April ’06. It was then re-recorded for The Frames last album ‘The Cost’, which was also released in ’06.”
Speaking to the Irish Independent, Once director John Carney said”we’re all discussing that [the eligibility of the song] at the moment to get clear, exactly, and figure this out.”
The RTE story states that Oscar officials “are likely to discount the fact that the song featured on two albums before it was released as part of Once, and are expected to focus on whether the song was specifically written for the film.”