No trailer yet for Extraordinary Measures (CBS Films, 1.22.10), the Brendan Fraser-Harrison Ford true-life drama (based on Geeta Anand‘s The Cure) about a father teaming with a scientist to create a medical-establishment-defying cure for his ailing kids. But here’s a video piece about the actual history that inspired the book and the film. 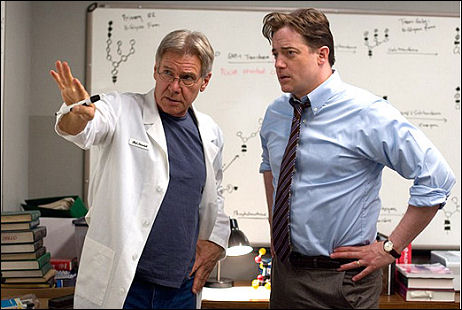 The appearance is obviously that of a medical procedural along the lines of George Miller‘s Lorenzo’s Oil (1992), as both deal with finding medical cures for sick kids without the aid of FDA-approved remedies. I’m guessing that Measures probably delivers a bit more raging machismo, which you can pretty much count on with Ford playing a staunch maverick type.

Ford, who’s also executive producing, clearly has a thing for dramas about families under threat. He’s not playing the dad (i.e., Fraser’s role) but it’s a familiar line of country.

The director is Tom Vaughan (Starter for 10, What Happens in Vegas). Michael Shamberg, Stacey Sher and Carla Santos Shamberg produced. The script is by Robert Nelson Jacobs (The Water Horse, Chocolat). The costars are Keri Russell, Courtney B. Vance, Dee Wallace (where’s she been?), Jared Harris and Patrick Bauchau.

I don’t remember Lorenzo’s Oil all that vividly. (I saw it only once, and that was 17 years ago.) But I have a recollection of it being not half bad, and of better-than-decent performances by Nick Nolte (as an Italian) and Susan Sarandon. N.Y. Times critic Janet Maslin wrote that it’s “not the maudlin television-movie version of such a tale. There are no false miracles; there are no self-congratulatory triumphs; there is no smiling through anyone’s tears. [The] film has an appealingly brisk, unsentimental style and a rare ability to compress and convey detailed medical data.”