No Fan of Stanwyck’s Butchy Phase, Especially in Westerns

Barbara Stanwyck‘s pre-code roles are interesting in a socially nervy context (she often played sexually brazen tough cookies who didn’t let guys push her around) but her flush period was between ’37 and ’44 — an era that began with Stella Dallas (’37) and ended with Double Indemnity (’44) but peaked, really, in ’41 when she was her crisp and feisty best in The Lady Eve, Meet John Doe and Ball of Fire. Stanny lost me when she cut her hair shorter (somewhere around 1948’s Sorry, Wrong Number) and began to play tough butch-boss types, especially in westerns like Alan Dwan‘s Cattle Queen of Montana and Samuel Fuller‘s Forty Guns (which pops on Bluray on 6.22.15 via Masters of Cinema). With a Brooklyn accent! On top of which Stanwyck was a right-winger who admired Ayn Rand and supported HUAC witch-hunting. 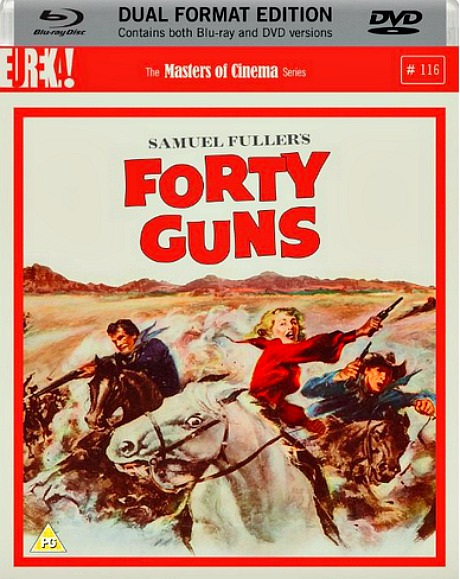 Commonly understood reality was never a strong point when it Samuel Fuller‘s films. The always seemed to say “you’re watching a selective, pick-and-choose, reality-averse popcorn movie…if you want realism watch a Rossellini film.” Why are Stanwyck and 40 guys galloping at such a speed in the middle of the western wilderness? No reason — Fuller just liked the idea of a few horses thundering by. The only thing exciting about 40 Guns is the black-and-white widescreen cinematography.