It just hit me that two movies about young mortals in love with young vampires will soon be upon us — Catherine Hardwicke‘s Twilight (Summit, 11.21) with Kristen Stewart having it bad for the blood-sucking Robert Pattinson, and Tomas Alfredson‘s Let The Right One In (Magnolia, 10.24), a tweener vampire romance from Sweden about a 12 year old boy (Kare Hedebrant) who falls for a female vampire (Lina Leandersson) who’s also 12 — and has in fact been 12 for a long, long time, due to her condition. 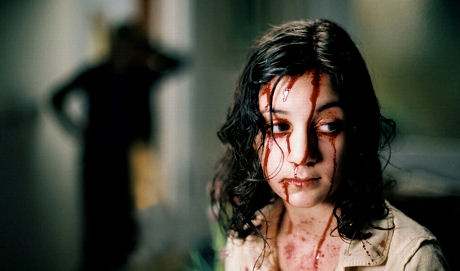 I haven’t seen Twilight, but I’m naturally suspicious of any film aimed at marginally hip under-30 women — far and away the emptiest, most clueless demographic on the face of the planet — on top of the usual young-male horror crowd. But I’ve been persuaded by film-wise friends and colleagues that Let The Right One In is much more my speed. I’ll be seeing it tonight or tomorrow so we’ll see.
I’m extremely late to the table on Let The Right One In, which has played almost every significant film festival over the past several months. It just won the Best Horror Feature Award at Austin’s Fantasticfest and won the Tribeca Film Festival Founders Award for Best Narrative Feature last May. It’s also something of a tearjerker, if you can go with that.
Cinematical‘s Scott Weinberg caught it at Tribeca and called it “one of the strangest, stickiest, and (yes) sweetest horror movies I’ve seen in ten years. It’s a pretty unique beast [and] a flick that would never arrive via the Hollywood studio system, seeing as how it deals with hardcore gore, pre-teen sexuality, and some rather nasty kid-on-kid violence. 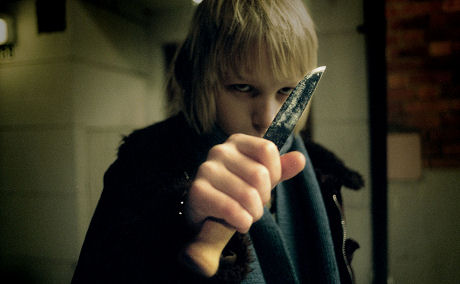 “And yet for a movie that has a lot of dicey components, it sure comes off as a really sweet story. That’s not just good filmmaking; that’s real intelligence behind the camera.”
The irony is that Hollywood — Overture Films and Spitfire Pictures — is in fact cooking up a remake. No script or director yet, but what are the odds that the remake won’t somehow coarsen and/or downgrade the particular alchemy that Alfredson has allegedly put together? American remakes of European film are always more obvious and common and aimed at a dumber crowd. Because, you know, Americans are almost always coming from a dumber, more emotionally primitive and less worldly place.
The only problem is the title. Who in hell is going to remember Let The Right One In or associate it with tweener vampires? Talk about a title that means nothing — nothing at all! — to anyone. Although it does sound cooler and cooler the more you say it.
Let The Right One In will open on 10.24 at West Hollywood’s Sunset 5 and at Manhattan’s Angelika Film Center. It will then open at Seattle’s Varsity on 11.14. 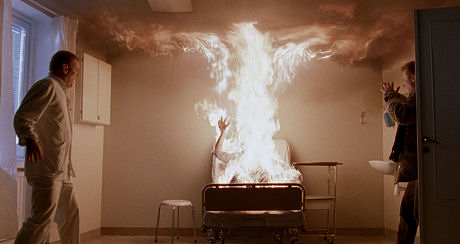