Harvey Pekar, the 70 year-old author of the ground-breaking comic book series “American Splendor” who was portrayed by Paul Giamatti in the much-admired film of the same name, was found dead earlier today in his Cleveland home. He’d been coping with prostate cancer, high blood pressure, asthma and (naturally) depression. Tough deal but he made his mark. 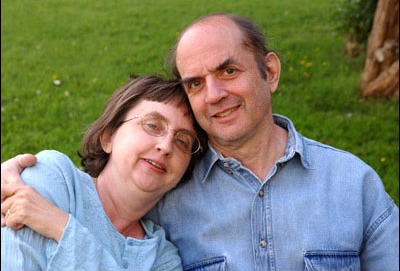 Joyce and Harvey Pekar at the 2003 Cannes Film Festival — taken by myself.

I interviewed Harvey and wife Joyce (who was played by Hope Davis in the film) on the big green lawn of the Grand Hotel at the 2003 Cannes Film Festival. He seemed like one sharp cat — extremely bright, alert, open-pored. He was more like a wolf in a sense, constantly sniffing and detecting whatever faint tremor or aroma might be in the air. He struck me as the opposite of smug.

Directed and written by Shari Springer Berman and Robert Pulcini, American Splendor won the Grand Jury prize at the 2003 Sundance Film Festival, and Berman and Pulcini won a ton of Best Screenplay awards. (They were Oscar-nominated for Best Adapted Screenplay but lost out in the ridiculous Lord of the Rings: The Return of the King sweep.) American Splendor won the Best First Film award from the New York Film Critics Circle, and Best Picture awards from the L.A. Film Critics and National Society of Film Critics.