A fond farewell to Jack Palance, a great character actor whom, during his heyday in the ’50s and ’60s, exuded a sublime aura of sinister silkiness. Palance, a big guy with cheekbones you could shave roast beef with, died today at age 85 (or possibly 87) at his home in Montecito, near Santa Barbara. 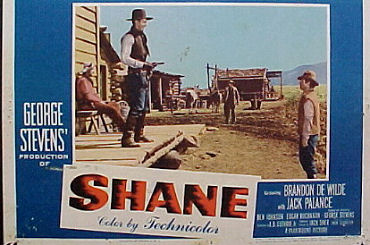 Palance’s first big career score was playing the hired gun “Jack Wilson” in George Stevens ‘ Shane, a guy so creepy and reptilian that a dog in the film would always get up and leave the room when he walked in. He has a great showdown scene with Elisha Cooke, Jr., slowly putting on his black gloves and drawing his big six-shooter like lightning, and then waiting a couple of seconds before drilling Cooke and sending him flying backwards into the mud. (The gun sounds like a two-ton cannon.)
In another scene Palance mounts a horse like a lizard, pulling himself up and then freezing for three or four seconds before swinging his legs over and climbing into the saddle — one of the most brilliant bad guy bits ever delivered in a western.
40 years later Palance won a Best Supporting Actor Oscar for his performance as “Curly Washburn” in City Slickers, opposite Billy Crystal.
Palance’s Wikipedia bio reads as follows: “Stepping onstage to accept the award, the intimidatingly fit 6′ 4″ actor looked down at the 5′ 7” Crystal, and joked, ‘Billy Crystal… I crap bigger than him.’ He then dropped to the floor and demonstrated his ability, at age 73, to perform one-handed push-ups. 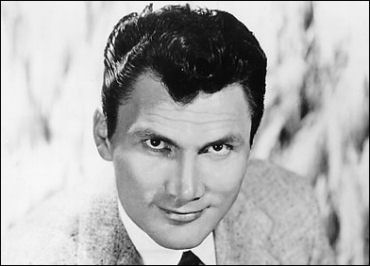 “Crystal then turned this into a running gag. At various points in the broadcast, he announced that Palance was backstage on the Stairmaster; had ‘just bungee-jumped off the Hollywood sign‘; had rendezvoused with the Space Shuttle in orbit; had fathered all the children in a production number; had been named People magazine’s Sexiest Man Alive; and had won the New York primary election. At the end of the broadcast, Crystal told everyone he’d like to see them again ‘but I’ve just been informed Jack Palance will be hosting next year.’
“The following year, host Crystal arrived on stage atop a giant model of the Oscar statuette, towed by Palance with a rope in his mouth.”
I always found Palance’s performance in Tim Burton‘s Batman to be irritatingly over-mannered, but I liked him a lot in Robert Aldrich‘s Attack, Jean Luc Godard‘s Contempt and Richard Brooks‘ The Professionals.
The son of a Ukranian coal miner, Palance’s birth name was Volodymyr Palanyuk.