Most of the 20something assistants who work for top-tier producers, agents and studio bigwigs think that their job is somehow about them — what they deserve, being shown the proper respect and consideration by their bosses, getting their weekends off. And if they aren’t treated the right way, they all go “waahhh.” Maybe one in ten of these guys understand that it’s not about their piddly-ass needs or their boss’s personality, but about excellence and doing it right and giving 110% or 115% in the service of whatever movie or deal or campaign they’re working on. 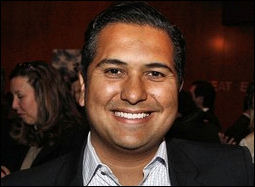 It’s clear that Mark Roybal, longtime employee of producer Scott Rudin and self-standing producer of Doubt (as well as Kimberly Peirce ‘s Stoploss, and executive producer of No Country for Old Men), is one of the latter. Anyone who lasts 13 years with Rudin has to be sharp and shrewd and fast on his/her feet. Because Rudin is a tough taskmaster — ask anyone. Won’t tolerate slackers, whiners. Lives by the motto that goes something like (I’m improvising here) “we turn out top-quality stuff and so we damn well need to be better than the rest.”

The key to the 35 year-old Roybal’s survival and success, he says, is that working for Rudin is “finally about working for the movies he makes, and who makes better movies than Scott at this point? He’s the David O. Selznick of our generation.” That sounds like brown-nosing, but it’s pretty close to fact. What producer has a higher pedigree than Rudin’s? Who makes films that are more consistently Tiffany? No one.

Besides, says Roybal, “He’s as tough on himself as he is on anyone else. He’s incredibly productive. Complacency is not part of his vocabulary.”

The Harvard-educated Roybal has been with Rudin since ’95. He started out as an intern, then became an assistant and then an exec assistant. He earned IMDB credits during this period as Rudin’s assistant on Marvin’s Room, In & Out, The Truman Show, A Civil Action and Wonder Boys. In 2000 he began running Rudin’s literary department, which he calls “the greatest job in New York…you’re operating in the nexus of film, theatre and publishing” and basically being a first-rate golden retriever, which basically involves scoping out and optioning the latest hot galleys. Roybal moved to Los Angeles five or six years ago, and now operates out of Rudin’s offices in the Animation Building on the Burbank Disney lot. He basically oversees the west coast shop while Rudin holds down the fort in Manhattan.

Very few bosses offer advancement to employees, I told Roybal. Most of the time you have to stand up and look them in the eye and say I want a raise, a better job, more responsibility, more power. “It’s a little bit of both,” Roybal answered, meaning that he stood up but that Rudin was obliging. “I think Scott is looking for people who’ve got fight in them,” he says. “I learned that early on. Scott’s generous when you’ve proven yourself. He’s fair, he’s totally fair. It’s a meritocracy. He’s there to support you but you’ve gotta deliver. I figure if I can do it with Scott, I can do it anywhere.”

Roybal and Rudin both have “produced by” credits on Doubt but it was Roybal who rode herd on the New York shoot, which happened from late ’07 to February ’08. Rudin had produced the Doubt stage play, but he was occupied on the shooting of Revolutionary Road and The Reader as well as post-production matters and the Oscar campaign for No Country for Old Men.

Roybal feels especially proud of the work in Doubt, which he calls “a tight clean movie that only cost $20 million dollars. [Director John Patrick] Shanley‘s screenplay is sharp as a tack, and the autumnal colors in Roger Deakins‘ cinematography…as good as it gets, not one wasted shot.” 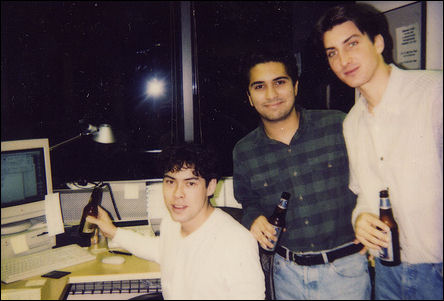 Roybal’s next producing gig may be on Snow and the Seven, a story based on Snow White and the Seven Dwarfs and set in Imperial Hong Kong of the 1870s. (The same basic bones with “a lot more action,” he says, “and of course with a wicked queen.”) There’s also the upcoming Nancy Meyers romantic triangle movie (Meryl Streep, Alec Baldwin, Steve Martin) and a Noah Baumbach film called Greenberg, which will star Ben Stiller .

Plus an adaptation of Jonathan Safran Foer‘s Extremely Loud and Incredibly Close, a hallucinatory 9/11 movie which Eric Roth has written the screenplay for.

Plus Liz Meriwether (Fuckbuddies) — “a truly comic voice, in the mold and vein of Tina Fey but with her own distinct tone” — is writing a movie for Rudin and Miramax called Maynard and Jennica.

Roybal has been married to Paramount marketing co-president Megan Colligan since ’02.

He seems a bit old-fashioned due to the fact that he reads print versions of newspapers — the N.Y. Times, New York Post and the Wall Street Journal every day plus the trades. Plus books, of course. Paper love! “I resist the Kindle,” he said. “There’s something very solid about reading a book and flipping those pages.” You’re a rank sentimentalist, I said. “A fundamentalist!” he answered..