As the Warren Beatty AFI tribute the night before last, Shampoo scriptwriter Robert Towne recalled that it took nine years to get that 1975 film made. ‘I’ve never known you to hold a grudge, reveal a secret or forget a phone call,’ he said to Beatty. ‘In 45 years you never opened yourself up. After all these years I’ve come to consider you as wise as Benjamin Franklin, who [was] also a ladies man. You’re part Fellini, part Machiavelli.'” — from Anne Thompson‘s Variety-blog account, which I should have linked to yesterday. 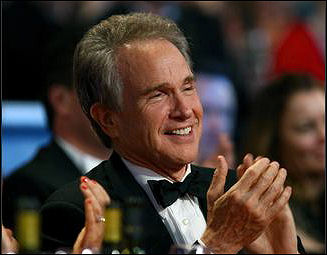 I’m just going to put this out there because it matters to me. A lot. I once saw with my own eyes a one-sheet for The Presbyterian Church Wager, which is what McCabe and Mrs. Miller was called before it was renamed. The poster showed Beatty and Julie Christie standing next to each other, and a photo (I think) of the unpainted church that was built over the course of the film, and which caught fire at the finale.
The poster I saw was a professionally composed piece of promotional art, and was therefore part of a limited print run. (It was probably used for display at exhibitor conventions.) Somebody, I’m guessing, has probably seen this poster somewhere, or at least heard about it. I’m looking to persuade an owner of ths poster, if I can find such a person, to let me make a high-quality xerox of it. I’ll then persuade Beatty to sign it for me, and then I’ll frame it and hang it on my wall and blah-dee-blah.