Felt So Mellow He Had To Leave

Tower Heist star Eddie Murphy has told an anonymous Rolling Stone writer that he didn’t angrily storm out of the 2007 Oscars after losing the Best Supporting Actor trophy to Alan Arkin. A Huffington Post account of the RS interview claims Murphy is saying that it’s “not so” that he left the Oscars. But it sounds to me like Murphy isn’t denying that he walked out — he’s saying he didn’t leave in a pissed-off mood. 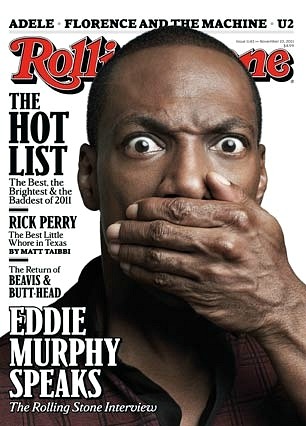 If Murphy is claiming he didn’t actually leave the show then his driver, Karlo Ateinza , doesn’t share this recollection. Just after the 2007 Oscars L.A. Times columnist Joel Stein reported that he spent Oscar night hanging at the Hollywood Bowl parking lot with Ateinza and other top celebrity limo drivers, and that at 6:52 pm Karlo’s cellphone rang and he said the following after hanging up: “I have to go right now…I have to pick him up.”

“Alan Arkin‘s performance in Little Miss Sunshine is Oscar-worthy, it’s a great performance. That’s just the way the shit went. He’s been gigging for years and years, the guy’s in his seventies. I totally understood and was totally cool. I wasn’t like, ‘What the fuck?’ Afterward, people were like, ‘He’s upset,’ and I’m like, ‘I wasn’t upset!’

“What happened was after I lost, I’m just chilling, and I was sitting next to Beyonce’s pops, and he leans over and grabs me and is like, [solemn voice] ‘There will be other times.’ And then you feel Spielberg on your shoulder going, ‘It’s all right, man.’ Then Clint Eastwood walks by: ‘Hey, guy… ‘ So I was like, ‘It’s not going to be this night!’ [Mimes getting up] I didn’t have sour grapes at all. That’s another reason I wanted to host the show…to show them that I’m down with it.”

So Murphy left the show early in a really positive mood, feeling great about Arkin’s triumph and just, you know, exuding alpha vibes about everything. Whoo-hoo, this is cool, good for Alan…I’m outta here!

The link to Stein’s story has disappeared off the L.A. Times website, but here’s how the story went:

“A perfect confirmation about Eddie Murphy having left the Kodak auditorium after he didn’t win the Best Supporting Actor Oscar has arrived by way of L.A. Times columnist Joel Stein, who spent last Sunday night hanging at the Hollywood Bowl parking lot with all the top celebrity limo drivers, one of them being Murphy’s driver, Karlo Ateinza, who’s been hauling Murphy around for the last seven years.

Here’s another story about the event.