Given David Poland‘s tendency to sound a little queeny and sometimes super-malleable when it comes to musicals, his 7.9 pan of Mamma Mia! is a significant thing. It’s also one of the funniest and best-written slams he’s ever posted on MCN. 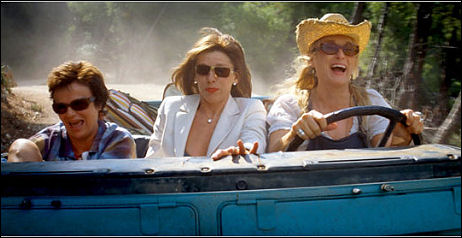 Other opinions will obviously add to the stew, but henceforth those who are determined to see this film with their friends and have a great time (i.e., the Sex and the City crowd) with a truly un-self-conscious girly-girl attitude are going to have to figure ways to keep themselves d & d between now and when they see it. So as not to permit discordant voices to, you know, muddle the experience.
“Hiring the stage director who doesn’t have the slightest idea how to shoot a movie and has no real understanding of why a movie is not simply the stage show on film,” Poland begins. “And this is, simply, why Mamma Mia! is a pretty terrible movie.
“Worse than Rent. Worse than Annie (a movie with three numbers that really work and an overall tone that does not). But it is one step better than the conversion of The Producers, as it is a jukebox musical and actually requires very little sophistication… just more than Phyllida Lloyd could deliver from behind a movie camera.
“I had a hard time getting a handle on what exactly they were going for with this melange of beautiful settings, terrible green screen (or whatever technique they used to leave massive lines around the actors’ heads when they were looking out onto the sea from the hotel), overt breaking out in song, 60-is-the-new-45 casting, big energy, little consistency, a stunning amount of obvious ADR-ed/dubbed dialogue scenes like we haven’t seen/heard in an American movie in a long, long time, and the bravest performance of Pierce Brosnan‘s career since anyone who sings like that choosing to expose himself to the public is daring indeed.
“After about 30 minutes, it hit me. They were making an AIP beach movie…Gidget Goes Grecian…How To Stuff A Wild Souvlaki…Marital Beach Party. It’s meant to be rollicking, cheesy, brain-dead good fun.
“I’m not kidding. There is a distinct filmmaking style that suggests that they looked at these films as a template. (Exec Producer Tom Hanks has also shown his interest in that period, including with his own directorial debut, That Thing You Do.) The problem is that the filmmaking doesn’t deliver on that either. Ms. Lloyd just doesn’t know what she is doing with the camera. She leaves some very talented people hanging in the breeze as she fails to understand the language of film and how to support the ideas of her actors’ performances with how she shoots the images.”
I wouldn’t be surprised if right now the Hollywood Reporter‘s Ray Bennett is out buying a fishing hat and dark shades and thinking about gassing his car in preparation for a trip to Mexico. He’s probably at least asking himself, “Is it nobler to stay in the States as my reputation as the guy who gave an enormous wet kiss to this film grows, or is it smarter to duck out now and wait until it all blows over?”
Full disclosure: Why haven’t I run my own review? Well, I showed up at last Monday’s screening at the Landmark (which I’d RSVP’ed to a couple of weeks prior) only to be told that Universal publicists didn’t want me to see it. So I guess I’ll just wait until July 18th to (a) confirm my suspicions or (b) fall surprisingly in love, or (c) arrive at some in-between place.