“Even with a relatively small amount of debt, decent health insurance, and a decent paying job, my family lives month to month. Treading water is the best anyone I know can seem to hope for. I believed I was voting for a president who would rein in Wall St. and reverse Bush’s aggressive foreign policies. What I got was more of the same and worse. I am the 99%.” 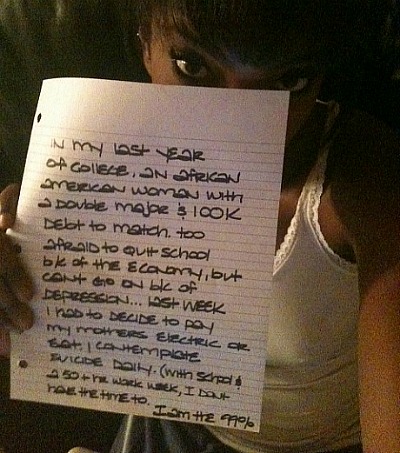 If you want to feel fairly good about your job and quality-of-life situation, even if you’re not doing as well as you’d like, spend 10 or 15 minutes reading We Are The 99 Percent. Trust me, you’ll feel very lucky and perhaps even blessed after doing so. This Occupy Wall Street-linked site tells you over and over that there are many, many people out there living lives that are impossible, agonizing…horrific.

All the young people dealing with crushing college-loan debt…awful. And all the people with beyond-debilitating health issues and pulverizing medical costs. How did they get so sick? How do five-year-olds get cancer? Who gets pregnant at age 21 with only part-time work and facing $80K in outstanding student loans? There are young women doing prostitution on the weekends to make ends meet. Life can be terrible.

Yes, life has always been crushing or gruesome for the people who aren’t smart or tough or savvy enough, or who damage themselves with bad food and/or addictions. But this site passes along a sense that many more people out there are having to deal with much harder burdens since the ’08 crash than before.

The bottom line for many Republicans and conservatives is that once they used to say “the world is for the few,” and now they’re saying “the world is for the very few…the 1%, that is. Sorry, U.S. citizens, but that’s the way it is, and we’re fighting tooth-and-nail to protect our security and pleasures and comforts even if it hurts or marginalizes the other 99%. Sorry but that’s Darwinism — we are fitter and sharper and better survivors than you. Things have gotten much tougher out there than ever before for the people who aren’t smart or healthy or sufficiently disciplined or clever or connected enough. We realize that. Fewer resources for more people, and the world is cracking under the strain. It’s getting to be a mad scramble and it’s not pretty but that’s life in the 21st Century. What do you want us to do? Give up our hard-earned wealth so the losers can have it a little bit easier? Life has always been unfair, and we didn’t make it this way. Well, okay, maybe we have but fuck it…we don’t care.” 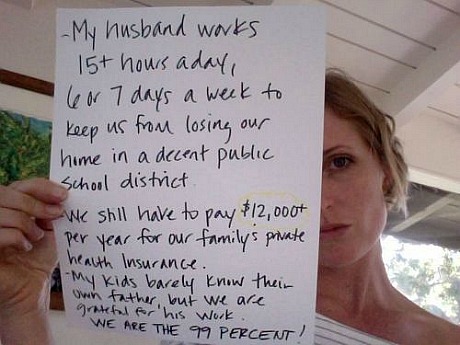 I write a daily/hourly column about Hollywood and worthwhile movies and Oscar season shenanigans and my life on this beat. I’m not loaded but I do fairly well and the business — wwww.hollywood-elsewhere.com — continues to grow each year. My future is assured as long as I keep doing what I’ve been doing well for the last 20-odd years, particularly since I started writing online and working 14 or 15 hours daily. I’ve worked very hard to get to this place, and it wasn’t easy along the way but it’s really great now. I go to free movies and watch beautiful Blurays and attend lavish parties, and I travel around and go to Europe every May, and I’ve earned the respect and allegiance of a lot of good people. I live in an attractive, fragrant, well-maintained West Hollywood neighborhood. I have two great cats, and I drive an attractive beater and a scooter and a bicycle. I have a great life, all things considered.

But my two brilliant and healthy sons, aged 23 and 21, are looking at a tough situation right now. Very tough. My oldest is working for a cool company but he earns less than minimum wage, and he has to fork over $700 per month to pay back his $160K student loan. Unemployment among the under-25s is something like 20%, if not higher. That’s not good. And the three of us are among the 99%. 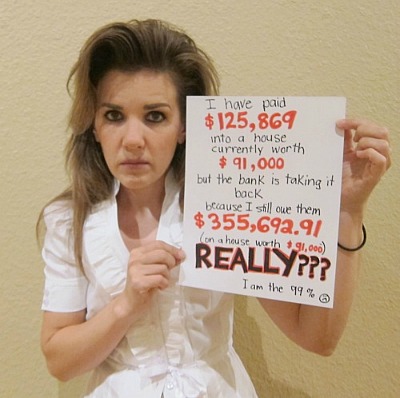