Fighter "Has It All"

David O. Russell‘s The Fighter (Paramount, 12.17) has strong but not AAA (i.e., Social Network-level) Rotten Tomatoes or Metacritic scores. And yet it’s igniting serious emotional excitement — perhaps more so than any other Best Picture contender so far. The passion of the big guns who are with it — N.Y. Times critic A.O. Scott and Salon‘s Andrew O’Hehir, among others — is deep and true. 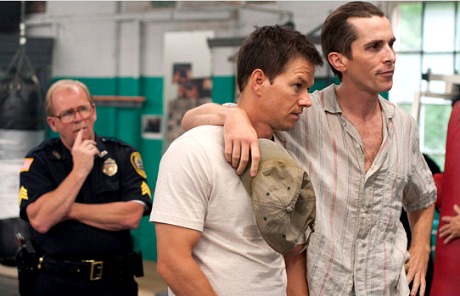 I’m feeling something here, something that might result in a Best Picture win with the New York Film Critics Circle or the Los Angeles Film Critics Association…who knows? I’ll never back off from my worship of The Social Network, but anyone can see that The Fighter is a way out of the Social Network vs. The King’s Speech impasse. I’m not saying this will happen, but it certainly could. My insect antennae is sensing earth tremors, a certain rumble, whatever you want to call it.

“The entire audience for The Fighter will know that ‘Irish’ Micky Ward (Mark Wahlberg), lovable palooka of Lowell, Mass., is going to get that title shot and reunite his brawling, hopeless family,” O’Hehir writes. “The magic of The Fighter is all in the telling, in the fact that Russell has taken a tale of mythic American redemption and one of those Hollywood screenplays with four credited writers and somehow made a movie so rousing, so real and so full of complicated emotions that it all feels brand-new.”

This echoes what I said on 11.12, to wit: “I really couldn’t understand how a movie about a boxer could possibly add something to the table that I hadn’t seen before in 20 or 30 other boxing movies, but The Fighter‘s focus on family feuds and crack addiction and delusion and the necessity of facing brutal truths and looking people you love in the eye and telling them they’re history unless they clean up their act…this is what real families do, and why this movie feels like it’s doing it plain and straight every step of the way.”

Back to O’Hehir: “Several other movies this year have tried to tackle working-class American reality (at least in its Caucasian, New England form), including Ben Affleck‘s self-indulgent thriller The Town and the tedious Hilary Swank vehicle Conviction. Russell’s jazzy, ruthless, affectionate and funny film outshines them all, and is a terrific date movie to boot: It’s a boxing flick with bone-jarring action scenes for the guys, and a family-and-relationship comedy for the gals!

“I’m just glad to get Russell back, because he makes movies with tremendous soul, as much of a cliche as that may be. Marvelously shot and edited, The Fighter has high style but is never showy, blends history and fiction in fascinating fashion, and includes several of the year’s best performances. Oscar voters may well end up weighing The Fighter against Black Swan, made by Russell’s friend and producer Darren Aronofsky — a similar fable, told in vastly different fashion — but no matter who wins, nobody loses. Taken together, these movies demonstrate that there’s still passion in American cinema.”

Writing in a deliberately cliched fashion, Scott says The Fighter “is quick on its feet and packs a mighty punch. With solid bodywork, clever feints and tremendous heart, it scores at least a TKO, by which I mean both that it falls just short of overpowering greatness — I can’t quite exclaim ‘It’s a knockout!’ — and that the most impressive thing about it is technique.

“This is yet another tale of an underdog battling long odds and stubborn adversity in search of a shot at the big time. It is also a love story, a family melodrama and the chronicle of a close and complicated fraternal relationship. The love of a good woman (the unaffectedly lovable Amy Adams), the rivalry and camaraderie between brothers, the battered face, bruised knuckles and wounded pride — The Fighter has it all.

“But the inevitable comparisons arise only in retrospect, when it settles down into the company of Rocky and Raging Bull and other very good (and Best Picture-nominated) boxing pictures. Mr. Russell, a restlessly — sometimes recklessly — inventive filmmaker, does not try to subvert the genre, but rather, as Clint Eastwood did in Million Dollar Baby, to refresh it, to find new insights and angles of vision within the parameters of the tried and true.

“Mr. Wahlberg, for his part, leans back against the ropes and watches, underplaying so gracefully and with so little vanity that you almost forget that the movie is supposed to be about Micky. Everyone else seems to do a lot more fighting than the ostensible title character. But the brilliance of Mr. Wahlberg’s quiet performance is that it so effectively mirrors the deep logic of the story, which is finally about the paradox of a man in a violent profession who is fundamentally passive and who must learn how to find some distance from the people who love and need him the most without abandoning them or betraying himself.

Another sample quote from my 11.12 review: “The simple fact is that The Fighter is alive, really alive. It’s a rugged little blue-collar thing that (I know this sounds like a cliche) pulses with grit and real feeling and emotional immediacy. It’s loose and crafty with a hurried, shot-on-the-fly quality. Which makes it feel appropriately ‘small’ and local-feeling. To watch it is to be in it.

And another: “Hollywood has made good films about Massachusetts blue-collar people, but for me they felt ‘acted’ (like The Town and, no offense, The Departed). But Russell and Wahlberg, shooting almost entirely in Lowell on a fast 33-day schedule, have made some kind of real-deal thing here.

“Ten minutes into [the] screening and I was saying, ‘Wait…this is good…this is good…this feels right.’ The acting is great from every player, especially from Bale (he’s got the big showy part) but also Wahlberg, Amy Adams and fierce Melissa Leo as the headstrong mother of Walhlberg, Bale and five or six of the gruntiest-looking family of blue-collar sisters you’ve ever seen in your life, let alone a film. And George Ward and several others are also on it. They all say what they mean and mean what they say, dammit. Nobody’s playin’ fuckin’ games here.”