FilmBuff, a video-on-demand channel for connoisseurs of high-quality, indie-level cinema as well as classics from all studios and realms, began to appear today on a couple of dozen cable systems, including Verizon’s FiOS and Charter. Cinetic Rights Management’s John Sloss and Matt Dentler, who told me about their new operation earlier today, said FilmBuff would be available on all the cable systems within two months time (i.e., by mid September).

Half of the films shown will be brand-new, unseen features or newish features that haven’t received the theatrical exposure their backers or fans felt was appropriate or deserved. The other half will be unseen gems from the not-too-distant past that have either been unreleased or hard to find on DVD. The films would be available for limited periods of three months or thereabouts.

“We’re excited about bringing more films to audiences around the country, both on broadband VOD and now cable VOD,” said Dentler, Cinetic’s head of programming “There’s a disconnect between movie audiences and quality films, both new and old. We’re trying to end that today.”

As one of the biggest sales-agent players in the indiewood scene, Cinetic is obviously in a good position to snag a wide array of films in both categories from various distributors and rights holders. Sloss and Dentler have relationships with everyone. And there isn’t a lot of competition right now in the VOD indie field except for IFilm and Magnolia, and they’re pushing their own product as opposed to Film Buff’s across-the-board offerings.

At present each download would cost the FilmBuff subscriber roughly $3.99 to $6.99, depending on the particulars of each title and deal. No flat monthly subscriber fees or discounted fees for subscribers are being contemplated for now.

My ears naturally perked up when I heard about FilmBuff making oldies-but-goldies available. This would mean possible deals to show all the older films I’d like to see but can’t due to various titles being unloved or unwanted by their rights holders. 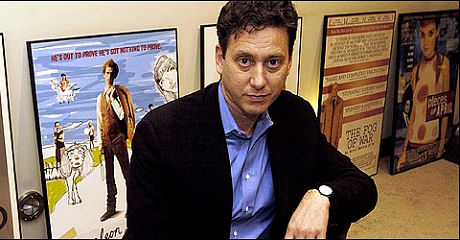 Like Ken Russell‘s The Devils, for example, or James Bridges‘ Mike’s Murder. Or Mike Nichols‘ The Fortune, Jack Webb‘s -30-, David Jones‘ Betrayal, Frank Perry‘s Play It As It Lays, John Flynn‘s The Outfit, Paul Mazursky‘s Alex in Wonderland, Robert Aldrich‘s The Legend of Lylah Clare, Robert Altman‘s That Cold Day in the Park, Mark Rydell ‘s The Fox and Carol Reed‘s Outcast of the Islands. And that’s just for starters.

Current titles in the launch package are Richard Linklater‘s classic Slacker and Rob Epstein‘s The Times of Harvey Milk, as well as new films like Michael Almereyda‘s New Orleans Mon Amour (starring Christopher Eccleston and Elisabeth) and the Tribeca 2008 hit comedy The Auteur.

FilmBuff is part of Cinetic Rights Management (CRM), which is an arm of Cinetic Media. Whereas Cinetic Media is a sales agent for traditional media, CRM is a VOD distributor, and a separate company with different staffing.

I’ll have more information about FilmBuff as the days and weeks progress, but this seems like something I’d definitely want to have as a viewing option.