I’ve only just now noticed a 3.25 q & a between Inception director Chris Nolan and Collider‘s Steve Weintraub about the formats used to shoot his 7.16 Warner Bros. release. 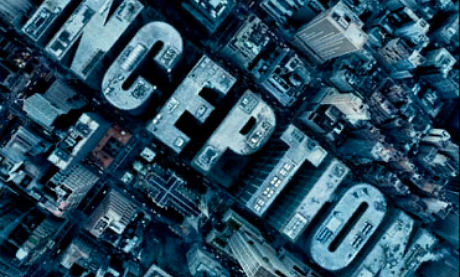 The stand-outs for me are Nolan stating (a) that he’s not all that down with shooting for 3D because “you have to shoot on video [to do that], which I’m not a fan of…I like to shoot on film,” and (b) that one of the formats used for Inception was VistaVision, the side-to-side 1.66 to 1 aspect ratio process hatched in 1954.

Of all the 2010 films in the pipeline, the one that seems the most ideally suited for genuine Avatar-level 3-D would be Inception, and yet Nolan, ironically, just wasn’t interested. Think of that already-famous shot of an entire section of Paris bending up and onto the sky in 3-D — it could be the most stunning 3-D sequence ever seen. But it’ll never happen, or at least not in proper 3-D.

“We shot the film with a mixture of mostly the predominant bulk of the film is anamorphic 35mm, which is the best quality sort of practical format to shoot on by far,” Nolan says. “We shot key sequences on 65mm, 5 perf not 15 perf, and we shot VistaVision on certain other sequences.”

Nolan is referring to special effects sequences, of course. As VV’s Wikipedia page states, “Although the last American VistaVision picture was 1961’s One-Eyed Jacks, VistaVision’s high resolution [has made] it attractive for some special effects work within some later feature films.”

Inception therefore “has a negative — a set of negative — that’s of the highest possible quality except IMAX,” Nolan explains. “We didn’t feel that we were going to be able to shoot in IMAX because of the size of the cameras because this film given that it deals with a potentially surreal area, the nature of dreams and so forth, I wanted it to be as realistic as possible. Not be bound by the scale of those IMAX cameras, even though I love the format dearly. So we went to the next best thing which was 65mm.

“So we have the highest quality image of any film that’s being made and that allows us to reformat the film for any distribution form that we’d like to put it in. We’re definitely going to do an IMAX release. We’re excited about doing that and using our original negative 65mm photography to maximize the effect of that release.

“3D, I think, is an interesting development in movies, or the resurgence of 3D. It’s something we’re looking at and watching. There are certain limitations of shooting in 3D. You have to shoot on video, which I’m not a fan of. I like shooting on film. And so then you’re looking at post-conversion processes which are moving forward in very exciting ways.”

“Exciting”? How about embarassing? Especially after the Clash of the Titans debacle.

“So really, for me, production of a large-scale film is all about recording the best, highest quality image possible so that you can then put it in any theatre in the best way possible. And 65mm film, IMAX film, VistaVision, 35mm — that’s the way you do that.”

I wish Michael Mann would give up on digital photography — it was a phase, let it go — and follow Nolan’s lead.