Finally, at long last, Warner Home Video is releasing a DVD of Richard Lester’s sublime and underseen Petulia on Tuesday, 6.20. Marshall Fine‘s blurb on Petulia‘s Amazon page is a little square-ish, but a pretty good sum-up: “This Richard Lester film will tell you more about how confusing the ’60s were than any hackneyed NBC miniseries ever could. In this fragmented love story, told in a nonlinear fashion that bounces back and forth in time, George C. Scott plays a newly divorced surgeon who meets a charming if scattered young woman, Petulia (Julie Christie). He falls into an affair with her, only to discover that she is married to a seemingly normal guy (Richard Chamberlain) — who also happens to be extremely abusive. But Scott’s efforts to extricate Petulia from the marriage, set against the flower-power scene in San Francisco, only frustrate him with her indecisiveness. The film features performances by the Grateful Dead and Big Brother and the Holding Company, and captures a sense of the confusion caused by the youthquake that swept the nation.” 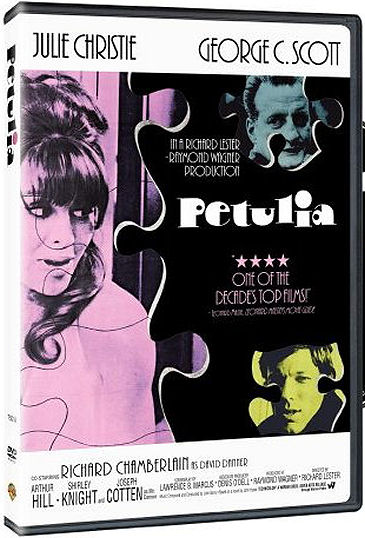