Social Network director David Fincher and star Jesse Eisenberg sat for a 30-minute q & a last night at the Leows AMC 34th Street with moderator Spike Jonze. This followed a magnificent digital 4K screening of the film. I slipped into the theatre during the last 20 or 25 minutes and it was like “whoa!”…an extra-large screen, razor-sharp focus, perfect projector lighting, magnificent sound. I’ve seen TSN five times but this was incredible. 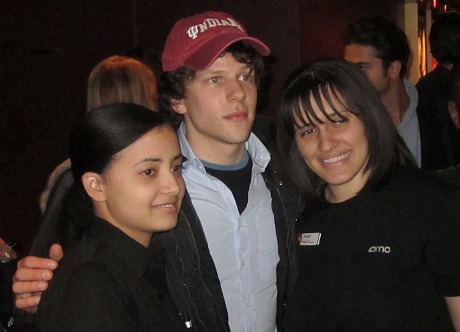 Fincher and Eisenberg said a lot of same stuff I was recording last September (naturally), but I liked a comment from Eisenberg about how the lines, characters and appearances they came up with (like Fincher’s complete lack of interest in Eisenberg dying his hair red to match Mark Zuckerberg‘s follicles) is “probably what makes [the film] a more interesting true story than a story of accuracy.” [Here’s an mp3 file containing this remark.]

Exactly! Aaron Sorkin‘s The Social Network script stays very close to the recorded facts behind the formation of Facebook, but the interpretive flourishes that he and Fincher and the others applied is what makes it an incredibly alive film.

I also liked this comment from Fincher: “For directors it’s very simple…the enjoyment you get out of reading a script is over the second you’ve read it, so everything from that moment becomes about getting back to that feeling of not knowing what the next page [or] scene is going to be.” [Here’s an mp3 file containing this remark.]

And this other one from Eisenberg, in which he says, in effect, that the socially alienated and/or isolated character of Mark Zuckerberg was a good fit because he himself is cut from a similar cloth: “I’ve only been in movies [in] an age in which people have written everything they think about movies on the internet….I wish I were older,” he said, sounding rather Woody Allen-esque in an analyst’s couch sense of that term.

“And I feel like…in a way that the [main Social Network] characters are isolated or they feel alienated from normal socialization. I isolate myself from any popular culture. I don’t see movies, I don’t have a TV, I don’t even have a DVD player….[and] I make an effort to isolate myself [in part] because I feel so innovative just by virtue of being in these films occasionally…it’s very strange.”

Eisenberg added, “I was on the subway and there was this guy holding an [iPhone] near my face and I knew he was taking a picture,…it was just mortifying.” [Here’s an mp3 file containing these and other remarks.]

Fincher is in the States for a holiday break from filming The Girl With The Dragon Tattoo in Sweden. He told me after the session that he’s completed about 40 days of shooting with another 70 or 80 left to go. (That sounds like he won’t be done before the Oscar telecast on 2.27.) 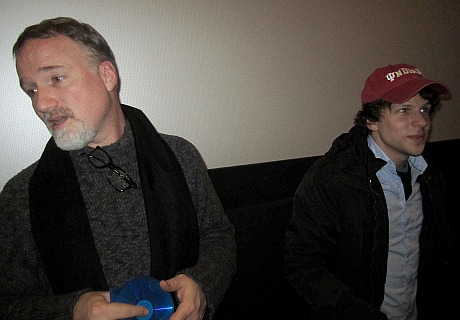 “So everyone is going to be speaking English with Swedish accents?,” I asked. Fincher said he’s run into a lot of Swedes who speak English without any accent at all. He met a driver, he said, who’d learned his flawless English from watching South Park. He mentioned something about costar Christopher Plummer speaking English in a relatively uninflected way.

Yeah, okay, but obviously most Swedes speak in their native tongue. I just don’t get why they didn’t set the whole thing in Vancouver and blow off the crazy-descendants-of-Nazis villains and use American nutters instead.

I asked Fincher and Zuckerberg during the q & a whether they’d read the current Time magazine story about their decision to name Zuckerberg “man of the year.” Fincher corrected me: “Person.” Huh? “Person.” The significance is that the story barely mentions The Social Network, and that it only comes up around the twelfth or fifteenth graph and then they drop it and move on. Jonze repeated the question so the audience could hear it and then said to Fincher in a playfully goading tone, “What do you think of that?” Fincher’s reply: “Shameful!” [Here’s an mp3 file containing this exchange.] 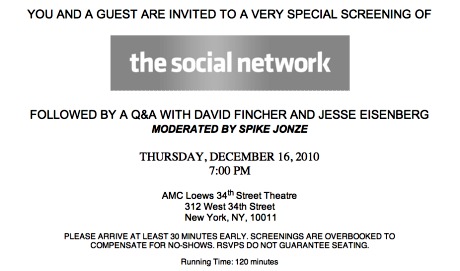 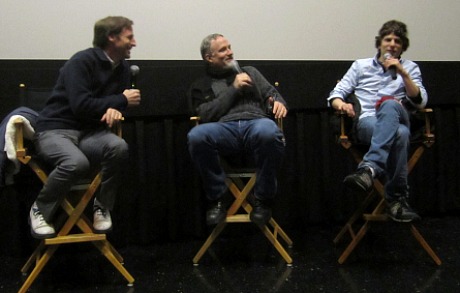