Blu-ray.com staff reviewer Jeffrey Kauffman has received Fox Home Video’s West Side Story replacement disc and has personally confirmed that the fade-to-black at the end of the overture problem has been removed in a new printing. Fox is exchanging bad discs via a toll free number (1.877.369.7867) or by emailing their customer service department (support@foxcustomercare.com). I wonder if I can exchange my British Bluray version? 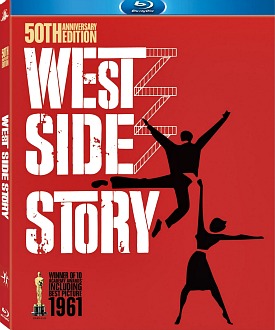 Remember that the bad guys in this episode appear to have been (a) HTV Illuminate CEO Jim Hardy, who may have inserted the fade-to-black problem during the high-def scanning phase, according to views posted by restoration guru Robert Harris, (b) MGM Home Entertainment vp technical services Yvonne Medrano, and (c) to a lesser extent MGM Home Entertainment senior vp publicity Michael Brown for his refusal to respond to calls and emails during my initial reporting about this incident last November.