I’ve tried three times to write a Scream 4 review, but the K-Mart-level cynicism and detachment in this film is so dull and yet nauseating I couldn’t do it. I just couldn’t put words to screen. To think that these movies actually used to be about playing it half-straight and making people feel scared from time to time. 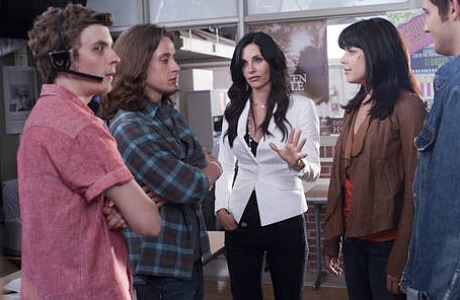 I happened to watch part of Gore Verbinski‘s The Ring on TV the other day, and that is still very frightening at times. Scream 4 isn’t fit to kiss the ass of this film, much less the original Ringu.

I realize, of course, that that soullessness is critical to Scream 4‘s satiric (and yes, occasionally comedic) intent, but I couldn’t begin to even think about laughing, much less smirking. The actors are required to act like zombies in this thing and that’s what they actually seem to be — young soulless attitude ghouls with the ability to walk and talk and convey indifference to everyone and everything, especially those in the audience.

I too felt dead in my willingness to sit there and watch this shit. If Ghostface has jumped off the screen like Jeff Daniels in The Purple Rose of Cairo and tried to finish me off, I would have run like hell because I want to live another day, but any honest person who pays to see this thing would be obliged to say, “Aaah, fuck it, go ahead, I deserve it.”

Neve Campbell is a good actress who cares and tries and therefore deserves a pass, but I came out of this film despising the ground that Emma Roberts and Hayden Panettiere walk on; ditto Rory Culkin and Eric Knudsen.

65% of the critics have given Scream 4 a pass so far. How can they live with that much cynicism? How can they breathe?