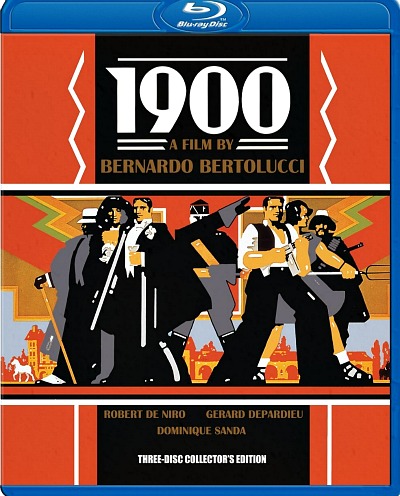 1900 is too pedantic and lecture-y at the end (or so I’ve always felt), but Vittorio Storaro‘s cinematography includes several complex extended tracking shots delivering special heavenly highs, and it has a couple of very upfront sex scenes and an unforgettable presentation of Italy’s old-world class division scheme and the horrors of 1920s and ’30 Italian fascism (vividly represented by Sutherland’s Attila character, a demonic perv for the ages). Ennio Morricone‘s score is a rapture in itself.

The five-hour version is a bear, but those great scenes are necessary to have and hold.

I’ve never forgotten a scene depicting a high-class party in Rome, set in the 1920s or ’30s, in which a white horse named Cocaine — a birthday gift, as I recall — is led right into the middle of the main room. That’s Bertolucci’s sensualism for you, as well as the drug culture of the mid ’70s.

I remember interviewing Hayden in 1978 at the Plaza hotel, and his telling me about his death scene in 1900 and how he wrote his final line — “I’ve always loved the wind.” But I knew it from memory and repeated it before Hayden had a chance to, and I remember his delight and his patting my knee in appreciation.

Novacento streets on 5.15, or a little more than two weeks hence.

Jeffrey Kaufman‘s 4.28 Bluray.com review is a good read, but I was immediately brought down by the announcement that Olive, a respectable boutique outfit, is presenting 1900/Novacento with a 1.78 to 1 aspect ratio. Not only are there many sources and indications that the film was shot and presented at 1.66 to 1, but I saw 1900 at the N.Y. Film Festival in September 1976 and can all but conclusively state that it was projected at 1.66. So bad on Olive for bending to the fascists on this point.

Olive is bringing out a High Noon Bluray on 7.17.