I spoke rashly and stupidly yesterday when I expressed advance disdain for Chris Sanders and Dean DeBlois‘s How To Train Your Dragon (DreamWorks, 3.26). I saw it in 2D tonight at an all-media screening, and while it doesn’t re-invent the family-friendly animation wheel it’s a well-written, emotionally satisfying “wow!” entertainment that will perform extremely well once the word gets out. It soars and charms and — holy dogshit! — is even “about” something besides a hunger to sell tickets. 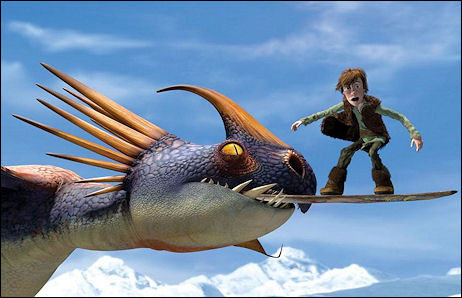 It has the familiar Jeffrey Katzenberg stamp — i.e., pure-hearted hero, colorful characters, well-contoured story, smart-ass dialogue, great visual sense. And like Avatar (which it visually resembles at times), it delivers a metaphorical sermon about war and peace that’s very lefty-pinko-peacenik.

Like Avatar, Dragon could be approximately described as the Pocahontas/Dances With Wolves story about a young protagonist in a threatening warfare milieu who decides to befriend the supposed enemy — in this case a flying, fire-breathing dragon — rather than slay and conquer, as he’s been taught to do by his staunch, hide-bound elders.

Hiccup (voiced by Jay Baruchel) is a dweeby Viking teenager trying to prove his mettle to his village-chieftain dad, a.k.a. Stoick the Vast (Gerard Butler), and somehow make a successful play for Astrid (America Ferrera), a feisty village teen.

But after buddying up with a wounded teenage dragon that he names Toothless, Hiccup gradually comes to see that war isn’t necessary at all, and that the marauding dragon “problem” isn’t caused by the dragons per se but a Kraken-like winged super-beast whom the dragons are compelled to serve. 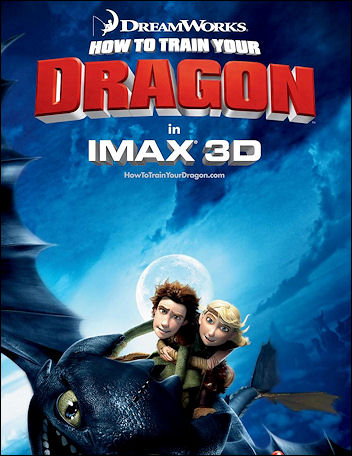 There are many scenes of Hiccup and Astrid soaring through the clouds on the back of Toothless, going “woo-hoo!” as they cruise low over the waves, glide through caves and canyons and around and over craggy rocky peaks. Which, of course, is pure Avatar — there’s no way to watch this footage without muttering “yup, same deal.”

And yet the visuals are fairly exhilarating, and I saw the “flat” version, mind. I said to a journalist pal as I left the AMC Empire that I’d kinda like to see it in 3D this weekend.

How To Train Your Dragon is quite pronounced in its liberal metaphorical messaging. The core theme is the saga of the young finding their own way — about the young minds of a Viking tribe standing up for their own beliefs and defying traditional ways. But it’s also Avatar-like in that it’s about (a) befriending the supposed “enemy” and (b) thereby breaking the bonds of an age-old warfare tradition — i.e., in order to be “proud Vikings” (i.e., good Americans) we must defeat and destroy those who threaten us.

The proverbial baddies were alluded to in Richard Lester‘s How I Won The War as the “wily pathan,” and if you let your mind go you could view the dragons as a metaphor for “them” — i.e., terrorists, Islamic fundamentalists, those who would attack and kill us.

In line with this, the big super-dragon which all the smaller dragons serve could be seen as Islamic jihad, the theology of martyrdom, radical fundamentalism, etc. The super-beast, the film is saying, is the real enemy because left to their own devices the regular dragons are actually fairly cool pets (i.e., just like the big screeching lizard birds the Na’vi flew around on in Avatar) who respond to petting and training and whatnot. 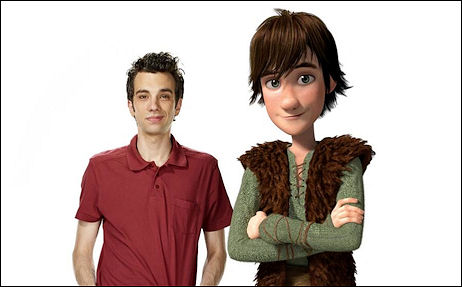