My first Toronto film won’t be a festival selection. Two nights hence I’ll be catching a work print of Casino Jack, George Hickenlooper‘s recently wrapped and currently-being-edited drama about the adventures of Republican businessman, lobbyist and scumbag Jack Abramoff (Kevin Spacey). I’ve been pestering the temporarily-Toronto-based Hickenlooper about seeing it, and the night before the festival begins seemed like the only time so that’s the plan. 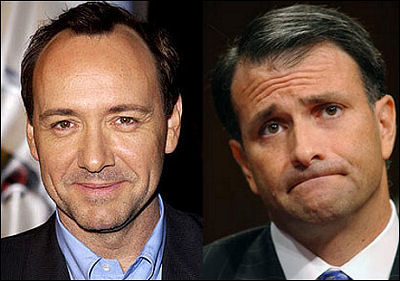 Critic F.X. Feeney (full disclosure: a friend of Hickenlooper’s) caught a version of Casino Jack a while back and has passed along the following: “It manages to make lucid, funny, revealing sense of all that Republican Bush-era madness. Although it never lets Jack A off the hook in matters of right versus wrong, it locates him humanly in a context that was already savage when he arrived. He’s guilty of being the best shark in the tank, and the others are remorseless with him when they smell blood.

“Key to this is Kevin Spacey’s performance, which is so nuanced and reliant on what he does best (that perpetual soul-searching as he thinks out loud — Hamlet on uppers) that it should perp-walk him to glory. The picture, I think, is a home run.”

Abramoff was a central figure in a series of high-profile Bush-era political scandals. He was convicted of fraud, conspiracy and tax evasion, and is currently doing time in a federal slammer in Cumberland, Maryland. Abramoff will be sprung sometime in December 2011.

Abramoff’s Wikipedia bio reads as follows: “Abramoff pleaded guilty on January 3, 2006, to three criminal felony counts in a Washington, D.C., federal court related to the defrauding of American Indian tribes and corruption of public officials. The four tribes Abramoff and his associates persuaded include: Michigan’s Saginaw Chippewas, California’s Agua Caliente, the Mississippi Choctaws, and the Louisiana Coushattas. Abramoff is accused of defrauding the tribes of tens of millions of dollars on issues associated with Indian gaming.

“The following day he pleaded guilty to two criminal felony counts in a separate federal court, in Miami, related to his fraudulent dealings with SunCruz Casinos. On September 4, 2008, a Washington court found Abramoff guilty of trading expensive gifts, meals and sports trips in exchange for political favors and he was sentenced to a four-year term in prison which will be served concurrently with his previous sentences.

“The Abramoff corruption investigation has led to the conviction of White House officials J. Steven Griles and David Safavian, U.S. Representative Bob Ney, and nine other lobbyists and Congressional aides.”