For The Sake of Emphasis

This morning’s (12.19) edition of Richard Rushfield‘s The Ankler newsletter lists the annual Ankler awards, aka “Winners of the Worst Year.” Somewhere near the end Rushfield mentions the failings of online Oscar know-it-alls: 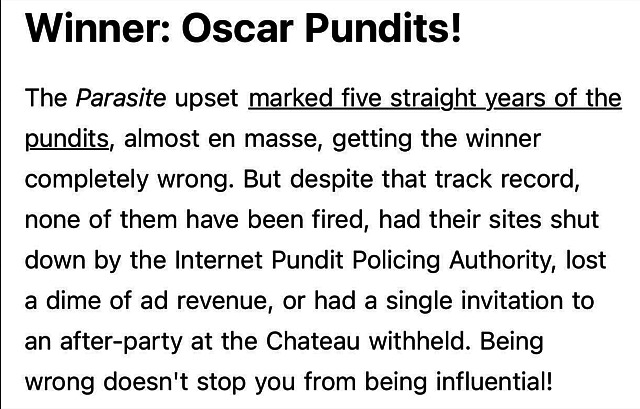 Here comes something I’ve said repeatedly since HE launched 16 and 1/2 years ago [August ’04] and which I mentioned at least once or twice during the Mr. Showbiz, Reel.com and moviepoopshoot days [October ’98 to August ’04]: In the eyes of the Movie Godz there’s nothing of less value in the Oscar punditry game than guessing how guild and Academy voters are going to vote.

There’s no harm in predicting if you want to get into that (I do to some extent) and if you want to measure your digital worth by it, knock yourself out. But in my view the only thing that matters in this racket is passionate advocacy — lobbying for what you love, and explaining over and over why this or that movie or performance or feat of music or cinematography or what-have-you rings your bell and deserves Oscar favor.

Argue and lobby for those efforts that you believe in your heart of hearts contain the Right Stuff, or at least for those contenders who’ve been repeatedly nominated or whose time has come. (French Exit‘s Michelle Pfeiffer, for example.) But to sit in the bleacher seats and bicker with colleagues about which nominees are more popular with the Academy hoi polloi…good heavens!

December 19, 2020by Jeffrey WellsNo Comments
« Previous post
Your Own Ones
Next post »
Unmentioned Element in “Never Rarely”