Sasha Stone on the theatrical death of She Said, a first-rate, totally approvable journalism drama: “Journalism changed completely in 2016, just like Hollywood did. The New York Times joined “the resistance” and lost its objectivity. Ditto high-minded Oscar fare. She Said tells the story as Hollywood always does, as though there is only one perspective on any of it. They just assume all of America agrees, or should because their word is the right one.

“Oscar movies aren’t bombing because they’re ‘woke,’ and many of them aren’t. The Banshees of Inisherin isn’t. It’s that Joe and Jane have been “’woked’ too many times, and so when a film comes along, they think ‘I’ll catch it on streaming.’ The last remaining group, to repeat, is likely staying home due to ongoing COVID fear. That isn’t everyone, but it’s enough to make a dent in the box office.

“I just got woked watching a movie recently that was kind of good overall. But its ultimate message was meant to make me, the viewer, feel bad about myself and my world because that is what they want you to feel. They want you to feel guilty and bad because they, the filmmakers, are noble and holy and are on the other side of it. 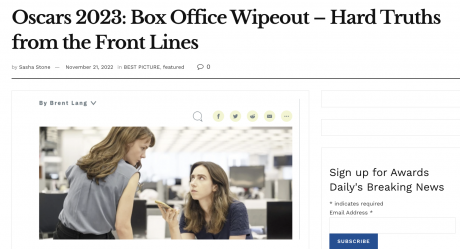 “I know lots of white people like this — or I used to, I should say. People who go around carping about ‘systemic racism’ and ‘white privilege’ as white people. That puts them on the other side and makes them seem “good” and “woke.” It gives them a sense of higher purpose.

“But the end result of this is always the same story. It’s like Christian Rock — no matter how good it is at the end of the day, it is always going to be about just that one thing. This movie I was watching, like almost every movie or advertising you see, was reminding me yet again of the hierarchy of race. White people are bad; everyone else is good.

“How can you ever expect actors of color — Black, Hispanic, Asian — to have any sort of chance to tell great stories if they’re trapped in the cocoon of white guilt and must always be portrayed as noble saints compared to the white heathens? Meanwhile, White people get all of the good parts because they are allowed to be imperfect, flawed, and corrupt. And ONLY THEM.

“I think personally that it betrays one’s sense of superiority ultimately, as does equity in Hollywood and the Oscars. They’re saying women and people of color can never be as good as white males, so they have to be ‘helped’ to win. But that robs them of their worth in the end because all it does is reward the whites who are giving it to them in the first place. See how good we are? See how ‘woke’ we are?

“Most people are sick of it, though hardly anyone will write about it because they will be slammed online.”

“Fatal Flaw with She Said: No dramatic tension.

“It was obvious that story was about two women reporters interviewing rape victims. And that the victory moment was when Ashley Judd said she’d go on the record. Their editors were supportive. The only hurdles they had to clear were child-care problems. The fatal flaw was obvious from even a casual familiarity of pre-release media. Cieply and many of the other commenters are overthinking and over analyzing the failure of this film.

“Ronan Farrow was on the same case. NBC torpedoed him in order to protect Harvey Weinstein for business reasons and lied about it for months. The NBC chapters alone are spectacular. In addition to finding and interviewing the rape victims, Farrow investigated the nefarious forces sent by Weinstein to trail him and intimidate his sources. The filmmakers chose the wrong story to tell. Ronan Farrow battled the top execs at NBC and dangerous spies. The Times reporters only battle was for babysitters.”