If I was better at persuading DVD publicists to send me freebies I might have seen some of the 24 films in the big fat Ford at Fox box set, which streets tomorrow. But I’m not (too much work) and I don’t have an extra $210 to blow, so thank fortune for the The Essential John Ford Collection (The Frontier Marshall, My Darling Clementine, Drums Along the Mohawk, How Green Was My Valley, The Grapes of Wrath and Nick Redman‘s 93-minute doc, Becoming John Ford), which is only $35. 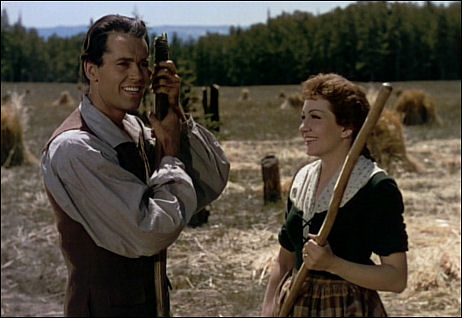 Although it may be the least of the five, Drums Along the Mohawk (’39) is the one I’m most eager to see. This is because it was shot in three-strip Technicolor at the dawn of the color era, and I can’t get enough of the semi-surreal look of this process. The colors almost look painted on, which they were in a sense. The result is something strangely luminous and “fake”, and yet strangely agreeable. Obviously produced from a crude technology, but that’s the fun of it.

To me, Henry Fonda has always been the monochrome middle-aged architect in Twelve Angry Men, mild-mannered and balding, but here he is with unlined, light-peach skin and thick jet-black hair and a young man’s anxiety. I know, I know…but I eat this stuff up. It’s so much fun to watch I can overlook the blustery cornball acting styles that are a hallmark of almost all Ford films. (Fonda and costar Claudette Colbert aren’t guilty of this in Mohawk, but almost everyone else is.)

The difference this time, apparently, is that the new Mohawk has toned down the poster-paint colors so it looks, to judge by the stills on DVD Beaver, a little less forced. 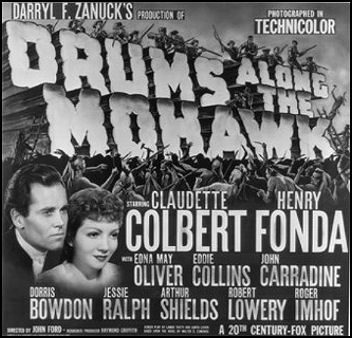