There’s a fighting-in-Fallujah project that I haven’t yet included in HE’s ever-growing list of Iraq-Afghanistan movies (now up to eleven) called No True Glory: Battle for Fallujah. It’s off the roster because it appears to be, for now, a Harrison Ford development project because there’s no director attached. 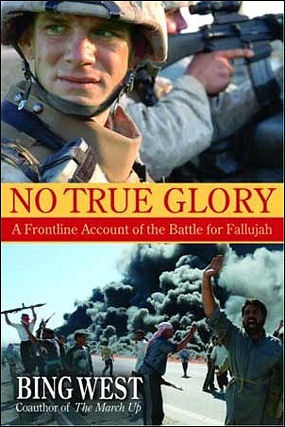 Nonetheless, a 5.13.07 L.A. Times piece by Dorzou Daragahi that was mainly about Nick Broomfield‘s Battle for Haditha said that No True Glory is “set for 2008 release.”

The Ford Fallujah project is based on Bing West‘s 2006 book of the same name, with a screenplay by Robert Munic. The two Fallujah battles, in April and October of ’03, represented the largest sustained U.S. military engagement since the Battle of Hue over thirty years earlier in Vietnam. Ford would play General James Mattis, a name that presumably signifies “valor” with some, but which does not yet ring a bell on this end.

The tally of eleven, one more time — two Afghanis (Lions for Lambs, Charlie Wilson’s War), seven Iraqs (In The Valley of Elah, Redacted, Stop Loss, The Hurt Locker, Imperial Life in the Emerald City, Grace is Gone and Nick Broomfield‘s Battle for Haditha), plus the Riyahd shoot-em-up thriller that is Peter Berg‘s The Kingdom plus Gavin Hood‘s Rendition (New Line, 10.12.07), which is about U.S. counter-terrorism efforts.

As I wrote earlier, “My understanding is that Marc Foster‘s The Kite Runner is more or less on its own nativist Afghani plane and therefore not really part of the club.”