It’s rare…well, relatively rare in films today for an actor to stop the action and converse directly with the audience. Most people think of this tactic as theatrical or uncinematic or bothersome, I gather. And if it isn’t done right (and I mean with exactly the right touch and emphasis), it can be excruciating. I’m trying to think, in any event, of my favorite moments along these lines as well as my least favorite. 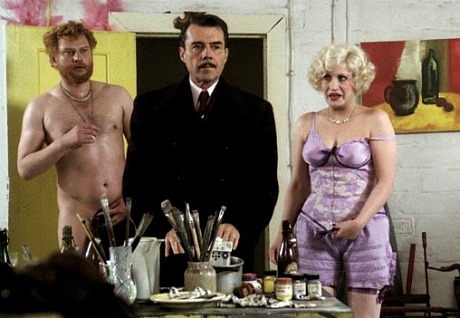 Topping the list, for now, is a scene when Dirk Bogarde addresses the audience in the opening moments of Rainer Werner Fassbinder‘s Despair. Bogarde has explained to us what a slow and tedious person his attractive wife is. (“Intelligence,” he tells her, “would take the bloom off your carnality.”) And when his wife proves this to us with some line or action, Bogarde looks at us with a sigh and delivers a “see?” gesture with his open hand. Or something like that.

Second-ranked are the several fourth-wall asides in Tony Richardson‘s Tom Jones (’63). Followed by Woody Allen‘s bitching to the audience in Annie Hall about a loudmouthed professor going on about Marshall McLuhan in a theatre line. These are the three that pop out.

I think there’s a rule about fourth-wall breakthroughs having to occur in the first act, and probably as early as possible in that act. Right?

The only time I can recall an actor eyeballing the audience for the first time outside of the first 10 or 15 minutes is a moment in the third act of Treasure of Sierre Madre. Walter Huston is being attended to by a couple of beautiful young women in a Mexican village, and after one leans over and gives him an amorous indication, Huston gives us a “whoo boy!” expression. He’s basically saying, “I don’t believe I’ve got it this good or have gotten this lucky at my age, but you and I both know there’s no way I’m passing this up.”