Jamie Foxx is a deeply charming and likable guy in-person…no question. But in this Kim Masters Slate piece about the making of Miami Vice, the 38 year-old Oscar-winner comes off as a swelled- head movie star who (a) lacks a certain something — a lack of commitment to “the job”, moxie, intestinal fortitude — or (b) has gotten a bit too full of himself. The bottom line is that Foxx put his own personal concerns over that of Miami Vice during shooting, and this, according to one of Masters’ sources, didn’t do the film any good. 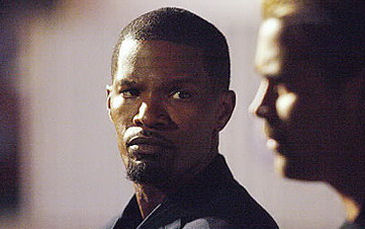 The key thing was Foxx’s decision to abruptly bail on the film’s Dominican Republic location shoot after a local man was shot and wounded by one of the film’s security guards. This forced director-writer Michael Mann to change Vice‘s ending and shoot it back in Miami. Mann spins it more positively than an unnamed crew member, but Masters’ story leaves you with a clear feeling that Foxx’s departure may have dramatically wounded Miami Vice to some extent.
“Even before going to the Dominican Republic, Mann had written an ending set in Miamii,” Masters writes, “but then decided to go to Paraguay, then to remain in Miami, and then again to film in Paraguay. Now he went back to the Miami ending.
“It was like turning an oil tanker around on a dime,” Mann tells Masters. “But the Miami ending worked out to be the better ending. It brought all the conflicting characters together in one arena.” Maybe, but would Mann say any different if the Dominican Republic ending was in fact superior? He’ s got a movie to sell and he doesn’t want to “war” with Jamie Foxx, with whom also made Ali and Collateral.
“‘It was very scary’ after the local man was shot, Mann says. ‘What if this guy has six brothers? What if they blamed us? All these questions rush into your head.’ He says care was taken to ensure that the cast and crew could leave the set safely that day.
“But immediately after that incident, Foxx and his entourage packed up and left for good. ‘Jamie basically changed the whole movie in one stroke,’ a crew member says — and not, in his opinion, for the better. The ending that was supposed to be shot in Paraguay would have been ‘much more dramatic.’
“Asked about Foxx’s departure, Mann doesn’t speak for a moment and then says, ‘You hear the sound of silence.'”