“In the last few decades the emergence of a geek elite has helped legitimize [an] outsider culture and helped bring legions of 97-pound weaklings into the sightlines of the industrial entertainment complex,” writes N.Y. Times critic Manohla Dargis in a late-to-the-table but remarkably perceptive Comic-Con piece that went up on 8.3. 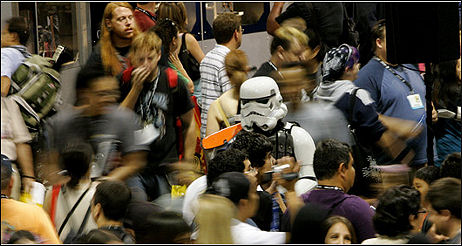 “In some respects America is now a country of freaks and geeks, self- professed outsiders who imagine themselves somehow different from the herd, perhaps because they are Americans — radical individuals who are united if only by their increasingly narrow interests and obsessions.
“This kind of atomization of the culture has its problems, as we know deep in our bones. Yet for all my worries that we are turning into a nation of iPod people, that√É¬¢√¢‚Äö¬¨√¢‚Äû¬¢s only part of the big, postmodern, late-capitalism picture. Despite all the plastic and dissembling, events like Comic-Con represent something genuine and true and, yes, powerful about how people live in the modern world.
“Every day we wake up to navigate through a faceless, inhuman, Made-in-China existence. Some of us escape through literature, some of us burrow deep into movies. And some of us find sweet relief in what, to the outside world, looks entirely disposable, useless and — here√É¬¢√¢‚Äö¬¨√¢‚Äû¬¢s that word again — childish.”