I’ve been trying to avoid dealing with Fred Claus (Warner Bros., 11.9), an obviously broad and garishly commercial family comedy starring Vince Vaughan, Paul Giamatti and Rachel Weisz, but it’s been made, it opens a month from now, and we may as well stand up like adults and face it. Every November somebody releases a right-down-the- middle family holiday film, and this seems to be a semi-misanthropic 2007 version. An upbeat Bad Santa without the booze and set in a Polar Express-ian Santa’s village? 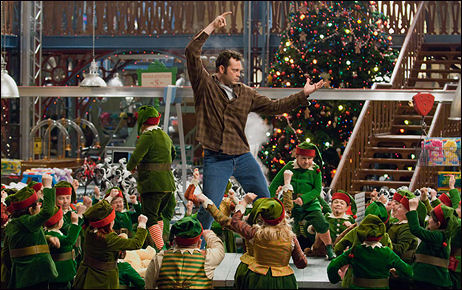 I was with the trailer until those ninja elves turned up. That was it. Check-out time. I’ll be out in the lobby.

The story is an appropriately snide and smart-ass spiritual redemption tale. Fred Claus (Vaughn) is the embittered brother of Nicholas “Santa” Claus (Giamatti). A repo man sent to the slammer for stealing, Fred is bailed out by Nick on the condition that he return home to the North Pole and enter the family business. And you know the rest.

Sometimes you just have to suck it in, hold your nose, make the movie and cash the check. And the family audience is happy because they have no taste as a rule and will scarf down anything you put in front of them.

A friend saw a preview and had nice things to say about Giamatti’s Santa Claus (“wonderful…exuded great warmth”) and applauded Weisz for making her part play much better than written. She feels that the script by Dan Fogelman (Cars) is…uhm, how should I put this? I don’t want to hurt anyone’s feelings. Okay, the word she used was “terrible.” She also feels that Fred Claus belongs more or less in the same category as Ilya Salkind‘s Santa Claus (’85), but that’s a horrible thing to say. I’m sure she didn’t mean it.

Her final thought: “I thought I’d be seeing another Elf and what I got was something that made those Tim Allen Santa Clause movies seem like Kubrick.” That’s a little blunt. Too abrupt and dismissive. Something tells me this may turn out to be half-tolerable. I can’t accept that Vaughn, who co-produced, would star in something as bad as she’s described here. There must be more to it….no?