Friends of “Empire of Light” (Installment #1)

From Ann Hornaday‘s Washington post review, posted on 12.7.22: “Empire of Light is a soothingly beautiful film — visually pleasing, emotionally rich, and authentically touching when it comes to Hilary and Stephen’s” — Olivia Colman and Michael Ward‘s — “evolving relationship. A shot early in the film, in which Hilary tends to the box office alone, exudes a Hopper-esque tone of elegiac solitude. With this bittersweet gem of a film, Mendes has given spectators a modest but profound gift: the reminder that, at their best, movies offer us not just a refuge, but a way to join the thrum of life, in all its pain and ungovernable glory.”

From Peter Bradshaw’s 9.12.22 Guardian review, filed from the Toronto Film Festival: “In his first solo outing as a writer as well as director, Sam Mendes has [made] an engrossing, poignantly observed and beautifully acted drama about love, life and the fragile art of moviegoing. And he does it with all the more urgency now that cinema is under threat again after Covid. This film takes something from the tenderness and sadness of movies like The Smallest Show on Earth or Cinema Paradiso or The Last Picture Show. But Mendes brings his own distinctive sense of personal drama, his adroit handling of actors and his sweet tooth for catchy jukebox slams, a style I remember from his American Beauty. Here we get invigorating blasts of Bob Dylan’s ‘It’s Alright, Ma (I’m Only Bleeding)’ and Joni Mitchell’s ‘You Turn Me on I’m a Radio.'”

From Leah Greenblatt‘s Entertainment Weekly review, posted on 9.4.22: “Olivia Colman, her eyes darting between hope and devastation, is so lit-up and specific (and funny, a quality that doesn’t seem to get mentioned enough) that she lifts nearly every scene in Empire of Light. And Michael Ward, a 24-year-old newcomer who looks a bit like Sidney Poitier at that age, is remarkably warm and grounded in a part that could easily have been swallowed by the Oscar winner playing across from him. The legendary cinematographer Roger Deakins — who last won an Oscar for Mendes’ 1917 — gives their beach trips and late-night bus rides a suffused glow. Even in a movie as modest as Empire, Mendes fills out the corners of his story with carefully observed details and eccentric characters, weaving them into a sort of sweetly self-contained whole.”

From Richard Lawson‘s Vanity Fair review, posted on 9.14.22: “[This is] an achingly lovely film — the best Mendes has yet made…humane and nourishing, a picture of rare thoughtfulness and decency.” 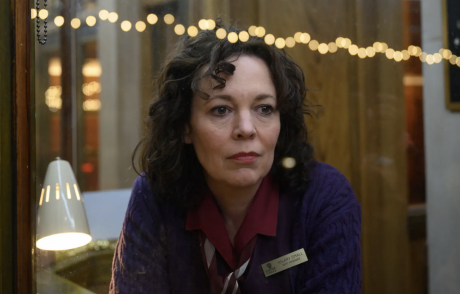