It’s Sunday evening (4.30) and Worldfest-Houston 2006 has come to a close. Earnest apologies for not providing more reports about the films I saw here and the filmmakers I conversed with over the last two days, but something got into me on Saturday — either the same lazy virus that attacks me at odd intervals like the flu, or some hair-brained whimsy or delusion about having some kind of weekend downtime for a change.
Worldfest had its big awards ceremony Saturday night at the Renaissance hotel, which I half-wanted to go to but decided to blow off at the last minute. I don’t mean to sound cavalier, but keeping tabs on the fest’s winners, near-winners and also-rans didn’t seem, in the final analysis, as important as going to The Stables, an old Houston restaurant near Rice University, and ordering a sizzling peppercorn steak. 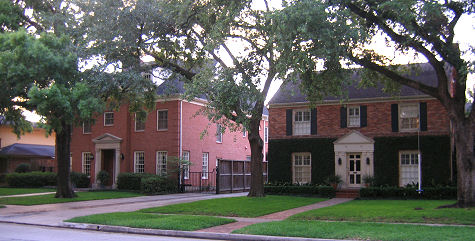 Jack Nicholson and Shirley MacLaine’s homes in Terms of Endearment, sitting on Locke Lane in Houston’s River Oaks section. MacLaine’s home (r.) has had a brick facade added that wasn’t in the film, and Nicholson’s has been remodelled also.

Anyway, nearly 24 hours have passed since the the ceremony finished and there’s no news account or official press release listing the winners that I can find. The winners will eventually be posted on this Worldfest page.
I briefly observed the last third of the ceremony at the Renaissance hotel, and I can report that lots and lots of filmmakers were given Remi awards. I spoke to two or three satisfied winners (one of them being Chris Buchholz, director of a documen- tary about his late father called Horst Buchholz, My Papa) in a lobby near the ball- room, and I felt something like a contact high coming from them. Recognition of merit from any film festival of note lends a measure of credibility and marketability to their film, and hand-to-mouth indie filmmakers need all the pats on the back they can get.
< ?php include ('/home/hollyw9/public_html/wired'); ?>
I had a sit-down on Saturday with movie-book author, film scholar and Houston- based Variety critic Joe Leydon. Naturally we went over the ins and outs of Worldfest, and out of this came an analogy that I thought sounded fair.
Ask any music critic about garage bands and he/she will tell you they’re an important part of the process of creating music that’s raw, vital and unfiltered. Many of the films shown at Worldfest, Leydon said, are garage-band movies. This implies they aren’t all first-rate achievements in each and every way, but that they deserve a measure of respect. I agreed with him.
Leydon mentioned that I’ve been the only out-of-town film journalist to fly into Hous- ton and report about Worldfest in quite a few years. I’m not sure if that’s true, but so what if I am? I sniffed around and dug in and gave it a whirl. I don’t know what that means, but I saw six or seven half-decent, fairly intriguing films — Letia Miller’s In the Dark, Matthew Marconi’s Truce, Shira-Lee Shalit’s The A-List, Paul Richards’ Pamplona: Running with the Bulls, Chris Page’s Into the Wind, and Robert Peters’ Half Empty. I’ll be seeing the Buchholz doc on Monday.
A week before leaving for Houston I spoke to Page, whose Into The Wind doc is about a few spirited Texans (i.e., Page and his friends) pursuing their love of powered paragliding. The charm is in the unassuming home movie-ish feel of it. Here’s an MP3 file of our conversation 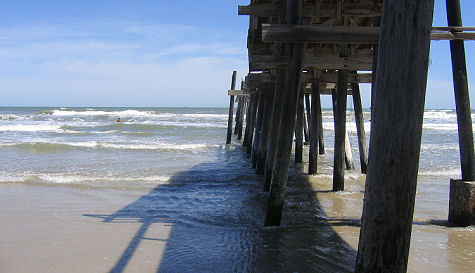 The Houston Chronicle has been running a lot of Worldfest film reviews, mostly written by Louis Parks. Maybe 15 or so films have been reviewed, and yet my choice for the best film of them all — Eric Anderson’s Way of the Puck — wasn’t reviewed. There’s irony in that.
I’d like to modify my diss about Houston being an “arid corporate hee-haw town.” It still is that, I feel, but there are rich people here who financially support opera and ballet and the fine arts, so the city isn’t all indoor shopping malls, fast cars, oil refineries, Tex-Mex food and strip joints.
I’ll take another swing at this piece on Monday morning before I fly back to Los Angeles — maybe something else will come to mind. Part of the weekend was about working on the brand new design of Hollywood Elsewhere — there’ll be a whole new bloggy look to it, with a series of WIRED-type items plus beginnings of features linked to pages with the entire article. I’ll also be hanging on to the current design by offering a link to it — it’ll be called “Elsewhere Classic” — on the new page.
I’m back for three days in Los Angeles and then I’m off again on 5.3 — Boston for three or four days, Manhattan and Connecticut for eight days, and then off to the Cannes Film Festival. 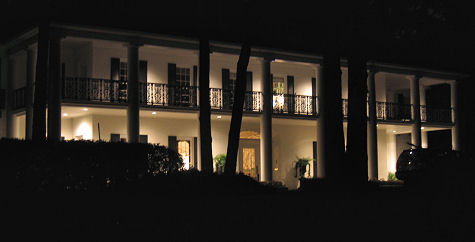 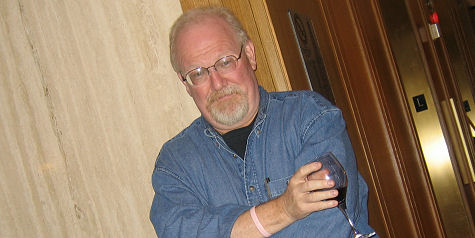 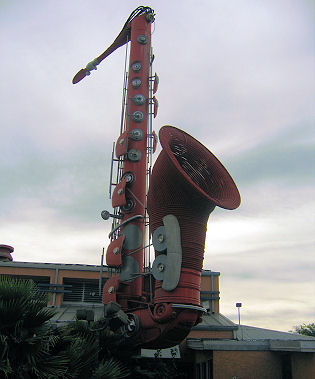 Sign outside a jazz joint on Houston’s Richmond Avenue. 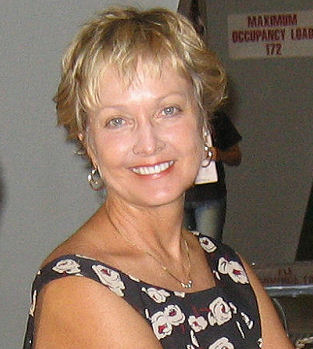 Worldfest publicist Cherry Kutac, one of those perky attitude-and-sparkling personality types with a totally committed attitude…worth her weight in gold 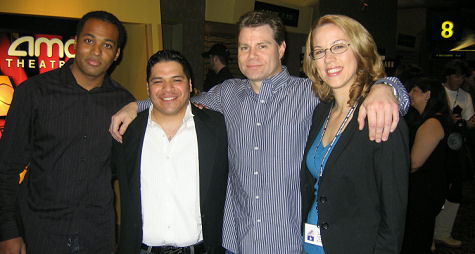 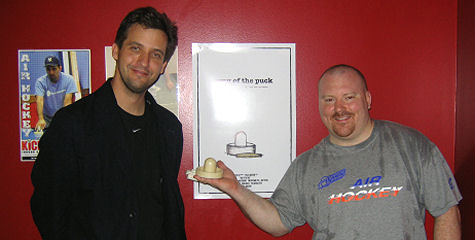 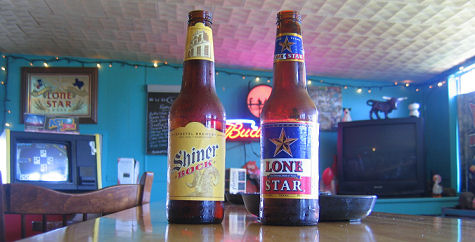 I’m staying in a soul-less, corporate-style hotel in Houston between now and Mon- day morning in order to dive into Worldfest, which I’ve never been to before. I was invited to visit a few weeks ago by its founder, Hunter Todd, and it seemed like an agreeable idea, and it felt even better as I flew the hell out of Los Angeles Wednes- day morning.
Worldfest is a friendly, funky-ass film festival that’s mainly about smallish, hand- crafted (as opposed to machine- or committee-crafted) indie films — some of them made by or starring Texans, and others from here and there.

The entrance to the big lounge at Houston’s Renaissance Houston hotel, just off the scenic Southwest Freeway.

Todd, who started this homegrown festival way back in the ’60s (only the New York and San Francisco festivals have been around longer), is the principal bequeather of the “friendly” stuff, although everyone I’ve met here so far — staffers, bus drivers, fast-food servers — has been warm, professional, considerate.
The funky-ass elements are…well, the movies. Pretty-good funky, I mean. Funky different. The better ones (and there are plenty I have yet to see) have a certain face-up quality. Not radically sophisticated and maybe a little average Joe-ish at times, like a hand-painted sign on Main Street or like tight jeans with cool-ass patches. One that’s a tad off-center, another that’s “there” but not 100% realized, but all with a certain non-Sundance-y apartness.
I’m saying it can be a refreshing thing to sample movies that haven’t been made by absolute cream-of-the-crop, front-of-the-pack types. Refreshing as in, “Oh, yeah… movies can tell stories this way too. And that way. Find your way through it…okay, I get it now.”
I’m not sure that the term “Worldfest” is entirely appropriate. It seems as if “Peoplefest” would be more on the mark. Movies by, about and for regular folks who love movies enough to see films with a few speed-bump elements (but not too many), and who enjoy the hell out of their Texas popcorn. (I had several handfuls last night, and it’s a lot more buttery than the popcorn in Los Angeles.)
I can think of three Worldfest films that are about Texans, or made by Texans, or featuring or costarring Texans. Lorraine Senna’s Paradise, Texas, the festival opener, about a middle-aged actor (Timothy Bottoms) on his way down who gets a chance to show what he’s made of. Matthew Marconi’s Truce, a not-bad drama about a weary old cowboy (Buck Taylor) trying to settle some life issues. And a documentary called Into the Wind about four or five Texans who are into power- paragliding. 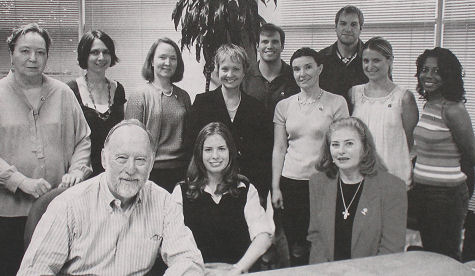 And then there’s In the Dark, a drama set in L.A. about a young Hispanic guy trying to become an agent, which can be called half-Texan by way of Brian Luna, an appealing actor from from San Antonio, playing the Hispanic guy. (I’m stretching it, I realize.) And then there’s Eric Anderson’s Way of the Puck, an air-hockey doc that I wrote about a couple of weeks ago, that’s kind of a Houston movie because a strong concentration of air-hockey enthusiasts live here.
Oh, and a doc about Gulf Coast surfers called Miles to Surf, which focuses in part on “tanker surfing,” which is about riding the wash generated by oil tankers head- ing up the Houston ship channel from the gulf.
There’s something mildly exciting about rummaging through a bunch of films that no one’s told you need to see or avoid, movies that may be excrutiating or a blin- ding revelation or somewhere in between…but it’s all a dice-roll.
The only beef is that the theatre where the Worldfest features are showing is way the hell down the road — four, five miles — from festival headquarters at the Renais- sance Houston. There are three shuttles that travel to and fro, but I’m the captain of my own ship. I’d rather walk, drive a car, peddle a bike, take a bus. 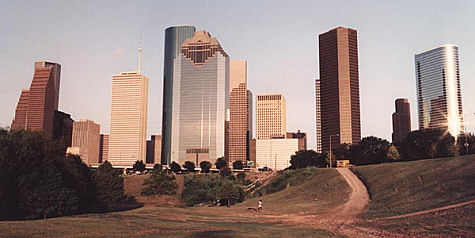 I said it felt really good to fly out of Los Angeles yesterday. But I’ll be honest — I started to have second thoughts minutes after I touched down in Houston.
There are good people all over this town but with the exception of a visit Wednes- day night to River Oaks, where the really rich folks live and where the oak trees are huge and the grass is moist and fragrant, Houston seemed less than abundant with down-home charm. And if you’ve been to New York or Paris or London or Rome, it feels lacking in cultural refinement.
To me, it’s an arid corporate hee-haw town. Not enough sidewalks. Cavernous malls. Lots of middle-aged guys with monster beer bellies. Expensive cars tearing around like they’re in the Monte Carlo Grand Prix. Not enough trees. Women with vaguely predatory vibes and long jaws and all those revolting glass-and-steel towers. And the strip clubs — strip clubs! — as prominent and well located as the better restaurants, music stores and markets…nothing covert about them.
A friend (a blonde whose presence and personality are the best things about being here so far) told me before I came that Houston is like L.A. but without the soul, and I think that just about nails it.
Early tomorrow morning I’m going down to the courthouse where the Enron trial is happening. And then I’ll drive by St. John’s, the private school where Wes Ander- son shot Rushmore, and maybe visit Shirley MacLaine’s Terms of Endearment house. 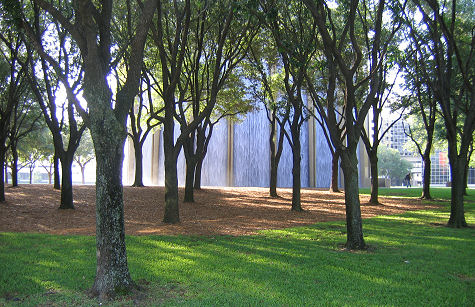 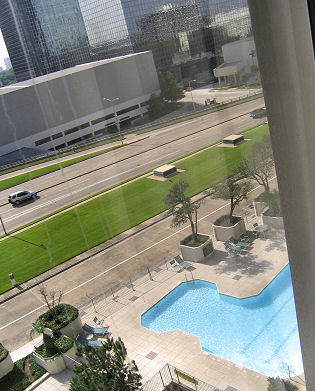 View from my hotel room, looking out on the beautiful Southwest Freeway.