Oscar strategist Tony Angelotti tells Variety pinch-hitter Sasha Stone that “being a front-runner can be a blessing and a curse. It’s nerve-rattling on one hand, because a front-runner can lose, an underdog can’t.” A prime example — certainly the most recent — is last year’s defeat of Brokeback Mountain in the Best Picture category by Crash, “proving once again that even the most formidable frontrunners are vulnerable.” 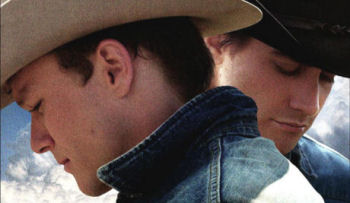 “And thus Crash joined the ranks of what are considered the biggest spoilers in recent Oscar history: An American in Paris, Chariots of Fire, Shakespeare in Love and Braveheart — all films that, for whatever reason, captured the hearts of Academy voters when everyone was convinced it would go the other way,” Stone writes.
An anonymous producer and Academy member says that “the Academy is a very middlebrow group, and they’re uncomfortable with homosexuality.” My own much-better quote follows: “The over-60, over-65, over-70 group in there just couldn’t roll with the idea of gay men in a Western setting. There are leaps that certain generations just can’t make. It’s not them. It’s not their history.”
Which ’06 film is the vulnerable frontrunner right now? Are qwe speaking of an obvious Best Picture contender startign with the letter “D” and, according to some, a Best Picture lock that’s starting to look — ask David Carr — like it has feet of clay? Or another D movie that’s looking stronger right now, but may lose out in the end of Little Miss Sunshine and/or Babel? You know the names, look up the numbers.