“Fuck You…I’m Not A Racist”

I’ve written three or four times about Mike Binder‘s Black and White, a racially-tinged drama in which a hard-drinking, well-off, basically fair-minded L.A. attorney and grandfather, played by Kevin Costner, goes eyeball to eyeball against his African-American in-laws in a custody battle for his granddaughter. And that’s too brief a description about what this film really gets into. Everyone puts on their tiptoe shoes when any kind of racial subject comes up in any context, but not Black and White. It plays it mild and sad and blunt and angry. It’s a lot more candid and straight-from-the-shoulder than you might expect. 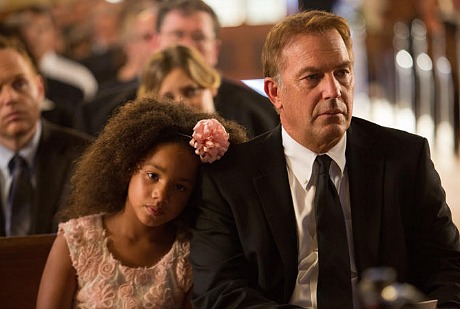 I saw Black and White last July with a bit of initial skepticism and concern, and I came out surprised and impressed. It doesn’t placate or soothe but it’s not snarly or inflammatory either. It just talks straight and open about…well, more than just racial matters. It takes a hard look at responsibility and parenting and racial identity and who’s really feeling what, and if you ask me it offers one of the frankest discussions about the black-white racial chasm since Barack Obama‘s Philadelphia speech about Reverend Wright, and before that Spike Lee‘s Do The Right Thing. I mean it. I really think it’s on that level.

I also think it delivers Costner’s best performance since The Upside of Anger and before that Field of Dreams. Really. His Dreams guy was about economic anxiety and dads and hope and reaching out and melting down. His Black and White guy, an angry-ass widower who drinks like a fish throughout the entire film and yet may not be an actual alcoholic, is about caring and who-gives-a-shit? fatigue and rage at a drug-using son-in-law and a compulsion to just spill out his blunt, take-it-or-leave-it feelings, especially during a big court-testimony scene at the end.

Black and White begins with Costner’s Elliott Anderson, an L.A. attorney, turning to drink after the car-crash death of his wife. For years he and his wife have been raising their half-latte, half-cappucino granddaughter, Eloise (Jillian Estell), after the death of their daughter, also from a car crash. Anderson believes that Eloise’s dad Reggie (Andre Holland), a weakling plagued with drug problems, is at least somewhat responsible for his daughter’s death. And then along comes Rowena (Octavia Spencer) looking for custody of Eloise, either in partnership with a cleaned-up Reggie or without. The film boils down to a battle between Elliot and Reggie, and between attorneys representing both sides in court. And the ending whams it right down.

Two or three weeks ago I developed this idea that Black and White is going to play a little stronger because of the Ferguson tragedy. Or maybe not. Maybe I’m reading too much into that possible linkage. I’m sure the reactions this weekend when it plays at the Toronto Film Festival will be, at the very least, interesting.

I have to say that there are a couple of moments in Black and White that feel to me like they’re trying too hard. It’s always better to pull back in films like this. Grim it up, tuck it in. There are three times in which Costner’s late wife, played by Jennifer Ehle, appears to him in moments of trial and ache, and for me all three of these scenes could be cut without hurting the film at all. But they’re not a huge problem — just briefly irritating. 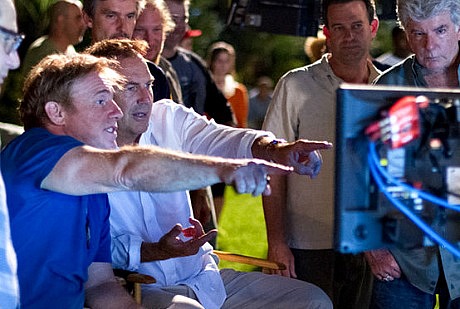 Costner, Binder during last year’s shooting of Black and White, which mainly happened in Louisiana.

Just consider this passage from an Entertainment Weekly interview between Costner (who produced and as well as starred) and Jeff Labrecque. The following passage expresses what the basic juice is all about.

Labrecque: “There are moments where I found myself nodding at both characters’ perspectives, like ‘exactly, I’ve felt that way.’ I suspect others in the audience, whether they be black, white, or Latino, might experience the same thing.”

Lebrecque: “Obviously, you and Mike are both white, and we see the story through [your character]’s perspective. Were you leery of tackling the race issue so directly?”

Costner: “No. I wasn’t. I don’t know why, but I wasn’t. I thought it was honest and truthful, and those things don’t scare me. We didn’t sensationalize things. They want to call Elliott a racist? I go to downtown Compton, I walk in that house. Do those people treat me cold? No, they come up and hug me. Say they miss my wife. On both sides, the race card was brought out, in order to win [the court case]. That’s the genius of what Mike wrote: He used that moment [in the courtroom] to say, ‘Fuck you, that’s not right. I’m not a racist. Just because I don’t fucking like you doesn’t make me a racist.’ And he brought it out of the mouth of an angry grandfather who thinks he’s going to lose. It’s an amazing tap dance that Michael Binder’s done here.”