What do Michael Clayton, Dolores Claibourne, Jerry Maguire, Audrey Rose, Susan Slade, Mildred Pierce and King Kong have in common? They’re all titles of movies that are named after their main characters because…well, hard to say. Nothing poetic or allusive in them. Were they so named because a first and last name sounds straight and unpretentious? You tell me.

Using a plain, simple-sounding “name” title that doesn’t imply or suggest anything thematic or tonal or alliterative. All these titles say is, “This is our main character’s name as it appears on his/her driver’s license.” (Except, obviously, in the case of one.)
I’ve heard from a friend of Michael Clayton (Warner Bros., 10.3), said to be a first-rate adult drama with George Clooney in the lead role, and he tells me that one reason for the title was that “the script/film starts with four page monologue voice-over from the Tom Wilkinson character” and so director-writer Tony Gilroy “didn’t want anyone to mistake his focus.”
Once “Michael Clayton” was typed on the cover page, the guy says, “everyone assumed they’d find a better title, and they were all still toying with alternatives until they saw the very first assemblage [of the film]. It’s so George’s movie. Suddenly, it felt dead-on.”
I had a question about this because “Michael Clayton” is just…well, a guy’s name. Nothing ironic or double-layered or smart-assy. And it’s not like the name rings a bell in a history-book sense, which was the justification for Neil Jordan and Liam Neeson calling their Irish rebellion story Michael Collins.
There’s obviously nothing “wrong” with Gilroy calling his film Michael Clayton — it’s fine — although it seems analagous to, say, Sydney Pollack deciding to throw out John Grisham‘s book title The Firm and call his 1993 Tom Cruise-Gene Hackman thriller Mitch McDeere instead. 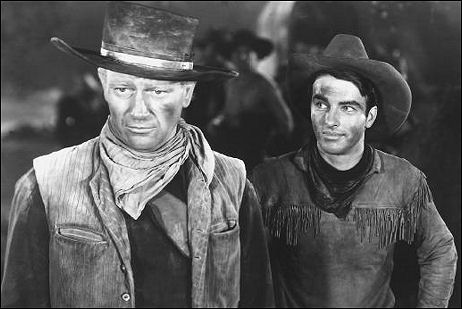 Or Gregory Hoblit deciding against calling his 1998 Richard Gere-Edward Norton thriller Primal Fear and going instead with Martin Vail (i.e., the name of Gere’s lawyer character).
Or Howard Hawks decided against calling his 1948 western classic Red River and going instead with Matthew Garth (i.e., Montgomery Clift‘s character) or Tom Dunson (i.e., John Wayne‘s).
Or Changing Lanes being thrown out by director Roger Michell in favor of Gavin Banek (i.e., the name of Ben Affleck’s character).
Or Brian DePalma deciding upon Tony Montana instead of Scarface.
Greer Garson‘s Mrs. Miniver isn’t the same kind of deal because of the “Mrs.” — that lends a certain titled distinction. And it’s not like Andrew V. McLaglen‘s McLintock! because that was just the last name of John Wayne’s character, and it used an exclamation point. Napoleon Dynamite was a different deal as well — the weird goofball sound of that name made for a kind of attitude statement.